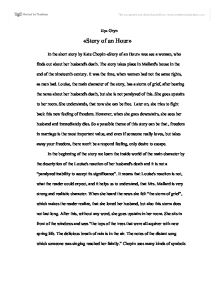 Story of an Hour

Illya Gryn "Story of an Hour" In the short story by Kate Chopin "Story of an Hour" wee see a woman, who finds out about her husband's death. The story takes place in Mallard's house in the end of the nineteenth century. It was the time, when women had not the same rights, as men had. Louise, the main character of the story, has a storm of grief, after hearing the news about her husband's death, but she is not paralyzed of this. She goes upstairs to her room. She understands, that now she can be free. Later on, she tries to fight back this new feeling of freedom. However, when she goes downstairs, she sees her husband and immediately dies. So a possible theme of this story can be that , freedom in marriage is the most important value, and even if someone really loves, but takes away your freedom, there won't be a respond feeling, only desire to escape. In the beginning of the story we learn the inside world of the main character by the description of the Louise's reaction of her husband's death and it is not a "paralyzed inability to accept its significance". ...read more.

Freedom is something everybody wants, and everyone in their life tries to get it as much as possible. And this incradable comes to Louise only after her husband's death. On the other hand, we know she is still in grief and Chopin describes hes as "a child was has cried itself to sleep continues to sob in its dreams." After reading the lines "there was something coming to her, and she was waiting for it fearfully" we can see that this is an involuntary feeling and it covers Mrs. Mallard. At this moment she doesn't know exactly what is coming to her and then she realizes that it "was approaching to possess her", and she is not be able to escape from it. Louse tries to fight it back, because she doesn't want to betray her her husband. However, she loses control and begins whispering "Free, free, free!" The author describes Mrs. Mallard's look as "look of terror that stayed keen and bright. Her pulses beat fast, and the coursing blood warmed and relaxed every inch of her body". ...read more.

But we know, that the real reason of her death was that, after she has tasted the feeling of being free person and living for herself, it becomes more preferable for her to die, that to return to her old life style. In conclusion, we see that the main idea that author wants to send us is that freedom in a marriage is the most important thing and even if someone loves you, but takes away your freedom there won't be a respond feeling, only a desire to escape. During reading the story we can see how feelings of the main character changed. First she had a storm of grief, then by using of symbols and personifications Chopin prepares us to the new feeling that is going to come. And this feeling is freedom. Later, she becomes so excited, that she is free and independent person. Anyway, she goes downstairs, sees her husband and dies, because her heart is too weak for such changes. She can't live her old lifestyle anymore and be controlled, after all this feelings she had before. So death becomes the only way for her. ...read more.