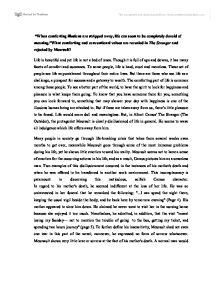 "When comforting illusions are stripped away, life can seem to be completely devoid of meaning."What comforting and conventional values are revealed in The Stranger and rejected by Meursult? Life is beautiful and yet life is not a bed of roses. Though it is full of ups and downs, it has many facets of comfort and successes. To some people, life is hard, cruel and merciless. These set of people see life as punishment throughout their entire lives. But there are those who see life as a challenge, a prospect for success and a gateway to wealth. The comforting part of life is common among these people. To see a better part of the world, to have the spirit to look for happiness and pleasure is what keeps them going. To know that you have someone there for you, something you can look forward to, something that may shower your day with happiness is one of the illusions human being are attached to. But if these are taken away from us, there's little pleasure to be found. Life would seem dull and meaningless. But, in Albert Camus' The Stranger (The Outsider), the protagonist Meursult is clearly disillusioned of life in general. ...read more.

Meursult even lights up cigarette in front of his mother's coffin. "...I felt like having a cigarette. But I wasn't sure if I should smoke, under the circumstances- in Mother's presence. I thought it over; really, it didn't seem to matter, so I offered the keeper a cigarette and we smoked" (page 7). Meursult does not know the meaning of respect and etiquette as it only takes less than a minute to go outside and have a smoke. Meursult figures with his mother already dead, smoking in front of her means nothing. Meursult said "it didn't matter" as if his mother didn't matter, as in she's dead and get over it. In fact everyone does die someday, Meursult proves to us that smoking in front of her does not bother him, nor does his mother's death affect the way he continues to live his life for the next couple of days. This reflects how he rejects to follow the conventional values one would rather get along with in such a situation. Meursult further shows his lack of caring about for his mother and social convention by going to the beach after the funeral. He goes out for a swim, and bumps into an old acquaintance, a woman named Marie. ...read more.

I minute later she asked me if I love her. I told her it didn't mean anything but that I didn't think so" (page 28). The discussion instantly turns to another topic and he ignores the issue. A normal man with feelings would take a girl aside, talk to them, and explain their feelings. Marie has been on Meursult's mind all the time, and he always wants to spend time with her. He loves the way she smiles, loves to be with her, and feels better when he sees her. To have him think about her all the time and then give an answer like that proves the one-dimensional side of Meursult. The simplicity of Meursult's character means that no issue, death nor love, exists as too large for him to put thought into. "A life without cause is a life without effect" This is how Meursult and his life can be described. He has no special cause or goal for life. Thus, the events and moments around him in his life does not affect him or his brain nor his emotions. Meursult does not show any emotion to any activities that do not involve him, and near the end of his life, Meursult gives himself up by telling us that he does not even care about himself. Camus presents death as Meursalt's best friend. ...read more.