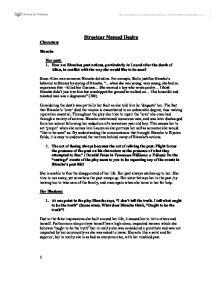 Streetcar Named Desire Characters Blanche Her past: 1. How are Blanches past actions, particularly in Laurel after the death of Allan, in conflict with the way she would like to be seen? Since Allan was someone Blanche doted on. For example, Stella justifies Blanche's behavior to Stanley by saying of Blanche, "...when she was young, very young, she had an experience that - killed her illusions... She married a boy who wrote poetry... I think Blanche didn't just love him but worshipped the ground he walked on... This beautiful and talented man was a degenerate" (190). Considering the death was partially her fault as she told him he 'disgusts' her. The fact that Blanche's 'love' died the trauma is exacerbated to an unbearable degree, thus making reparation essential. Throughout the play she tries to repair the 'love' she once had through a variety of actions. Blanche entertained numerous men, and was later discharged from her school following her seduction of a seventeen year old boy. This causes her to act 'proper' when she comes into Lauren as she portrays her self as someone she would "like to be seen" as. ...read more.

Stanley's pragmatism of survival is that he wants Blanche to leave, so everything is back to normal within the household. Stanley's motif once Blanche comes to visits is he wants her to leave so he can have sexual intimacies with his wife (Stella). He is ignorant to the material and superficial objects which Blanch possesses; he is unable to understand the value of each thing. He has a great desire for wealth, Stella confirms, he is the "only one that would get anywhere" from his group, indicating he is able to survive and earn the money. Furthermore he is not ignorant toward the law, as he questions Blanche about the "Napoleonic code", a law stating everything which belongs to the wife belongs to the husband as well. Stella 1. Is Stella a static character? A static character is someone who remains unchanged throughout the play. Stella would be the static character within this play, since she her opinions do not change no matter what is said. She cannot face the truth and forces herself to ignore reality and only see the untrue hope. Ironically, Blanche tells he sister to "pull [herself] together and face the facts." ...read more.

Her false reality is alive as shown by the responses, "I couldn't believe her story and go on living with Stanley," and, "Don't ever believe it. Life has got to go on. No matter what happens, you've got to keep going." By not believing her sister, the illusions won the battle over reality, and unfortunately lead to the demise of both characters. Stella never knew the truth and is starting a family based on a lie, and worse Blanche lost touch with reality and went insane. The world outside the apartment is not any better than inside, yet the home in which one should seek for refuge from problems, turned out to be the source of their largest problem; this may have added to the confusion between fantasy and reality. Out of the three main characters, Stanley is the only one which does not live in a fantasy world and is straightforward with what he does. He questions Blanche's possessions with ignorance, and is not bothered if he hurts anyone's feelings. We learn how Stanley keeps Stella under the thumb. However violent Stanley might be, she won't reveal that her relationship has problems to Blanche or anyone. Blanche puts up a wall, and creates a performance and acts like a person she is not living in a fantasy life. ?? ?? ?? ?? 1 ...read more.