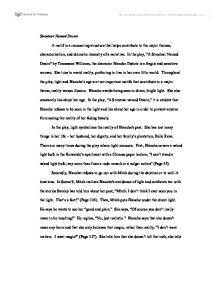 Streetcar Named Desire A motif is a reoccurring structure that helps contribute to the major themes, characterization, and dramatic intensity of a narrative. In the play, "A Streetcar Named Desire" by Tennessee Williams, the character Blanche Dubois is a fragile and sensitive woman. She tries to avoid reality, preferring to live in her own little world. Throughout the play, light and Blanche's age are two important motifs that contribute to a major theme, reality versus illusion. Blanche avoids being seen in direct, bright light. She also constantly lies about her age. In the play, "A Streetcar named Desire," it is evident that Blanche refuses to be seen in the light and lies about her age in order to prevent anyone from seeing the reality of her fading beauty. In the play, light symbolizes the reality of Blanche's past. ...read more.

Blanche says that she doesn't mean any harm and that she only believes that magic, rather than reality, "I don't want realism. I want magic!" (Page 117). She tells him that she doesn't tell the truth, she tells it, as it ought to be. Blanche is vulnerable and she finds comfort in the darkness that hides her no longer youthful face. The fact that Blanche cannot tolerate light increases the dramatic intensity of the narrative because now, the reality of her life is coming to an end. There are many parts in the play where Blanche lies about her age. Lying is her way of avoiding reality and reinforcing herself to believe that she is still young. Blanche needs her youth. In scene 5, Stella asks Blanche, "Why are you so sensitive about your age?" ...read more.

Here, he does mind the lies she has been telling him about her age and her past. Blanche explains to Mitch that she lies because she doesn't want to accept the hand life has dealt her. Lying to herself and others allows life to appear, as it should be rather than as it really is. In order to mask the reality of her past, Blanche creates illusions, that she is this happy and young woman. She creates these dramatic illusions and intense lies so that no one would think less of her. Blanche uses the darkness to shield herself from the reality that she is not that young woman anymore. She cannot have a bare light bulb and she has to make it softened to reinforce herself in believing she is still young. She lies about her age to stay alive in her own little world of fantasies and imagination. In Blanche's little world, she believes that hiding from the light and lying about who she really covers her ugly reality. ...read more.