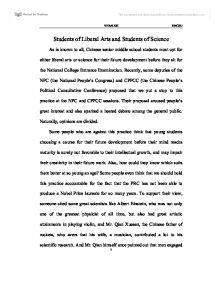 Students of Liberal Arts and Students of Science? Chinese senior middle school students must opt for either liberal arts or science for their future development before they sit for the National College Entrance Examination. Recently, some deputies of the

Students of Liberal Arts and Students of Science As is known to all, Chinese senior middle school students must opt for either liberal arts or science for their future development before they sit for the National College Entrance Examination. Recently, some deputies of the NPC (the National People's Congress) and CPPCC (the Chinese People's Political Consultative Conference) proposed that we put a stop to this practice at the NPC and CPPCC sessions. Their proposal aroused people's great interest and also sparked a heated debate among the general public. ...read more.

To support their view, someone cited some great scientists like Albert Einstein, who was not only one of the greatest physicist of all time, but also had great artistic attainments in playing violin, and Mr. Qian Xuesen, the Chinese father of rockets, who avers that his wife, a musician, contributed a lot to his scientific research. And Mr. Qian himself once pointed out that men engaged in scientific research also need some literary or artistic attainments. However, some people go for this practice. ...read more.

They think that our educational systems truly have some flaws and defects. But the thing to be corrected and reformed is not this practice, but the National College Entrance Examination itself. Should I be asked about my opinion, I should say, I'm firmly against this odious practice because it prevents most students from broadening their knowledge and hence, makes them so narrow-minded, with the result that some students of science may not even know much about men like Su Tungpo who is the most illustrious man of letters of all time. ?? ?? ?? ?? YIYAN XIE ENG3U 1 ...read more.