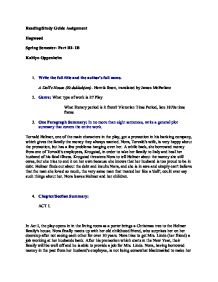 Reading/Study Guide Assignment Hogwood Spring Semester- Part III- IB Kaitlyn Oppenheim 1. Write the full title and the author's full name. A Doll's House (Et dukkehjem)- Henrik Ibsen, translated by James McFarlane 2. Genre: What type of work is it? Play What literary period is it from? Victorian Time Period, late 1870s time frame 3. One Paragraph Summary: In no more than eight sentences, write a general plot summary that covers the entire work. Torvald Helmer, one of the main characters in the play, got a promotion in his banking company, which gives the family the money they always wanted. Nora, Torvald's wife, is very happy about the promotion, but has a few problems hanging over her. A while back, she borrowed money from one of Torvald's employees, Krogstad, in order to take her family to Italy and heal her husband of his fatal illness. Krogstad threatens Nora to tell Helmer about the money she still owes, but she tries to end it on her own because she knows that her husband is too proud to be in debt. Helmer finds out about the debt and insults Nora, and she is in awe and simply can't believe that the man she loved so much, the very same man that treated her like a 'doll', could ever say such things about her. Nora leaves Helmer and her children. 4. Chapter/Section Summary: ACT I. In Act I, the play opens in in the living room as a porter brings a Christmas tree to the Helmer family's house. Nora finally meets up with her old childhood friend, who surprises her on her doorstep after not seeing each other for over 10 years. Nora tries to get Mrs. Linde (her friend) a job working at her husbands bank. After his promotion which starts in the New Year, their family will be well off and he is able to provide a job for Mrs. ...read more.

This is brave and strong of Nora to openly admit that she is a bit scared and not sure as to what is really out in the world, seeing as she has lived such a protected life for so long. This relates back to the thematic statement because this is going against what society would want, which is why she is going to "try to discover who is right, society or herself". * "You know very well that wouldn't last. Goodbye, Torvald. 9. Motif- Freedom: The definition of freedom changes throughout the play, making it a significant motif. 10. MINIMUM OF 10 words with definition and the quote from the play that contains the word Dissolution- * Dr. Rank: "I shall know pretty certainly when it will be that the horrors of dissolution will begin." (Act Two) * coming apart, as a person does during an illness Lark- * Helmer: "Is that my little sky-lark chirruping out there?" (Act One) * a songbird Forlorn- * Mrs. Linde: "But now I'm completely alone in the world, and feeling horrible empty and forlorn" (Act Three) * desolate or dreary; unhappy or miserable, as in feeling, condition, or appearance. Tarantella- * Nora: "You see, the Stenborgs are having a fancy dress party upstairs tomorrow evening, and now Torvald wants me to go as a Neapolitan fisher lass and dance the tarantella. I learned it in Capri, you know." (Act Two) * a fast, whirling southern Italian dance, usually performed by a single couple, once supposed to be a remedy for a tarantula bite. Loathes- * Dr. Rank: "There is something I want to ask you. Helmer is a sensitive soul; he loathes anything that's ugly. I don't want him visiting me." (Act Two) * To dislike (someone or something) greatly; abhor Ailing- * "His father was a horrible man, who used to have mistresses and things like that. ...read more.

How are they all related? Internal conflicts? External conflicts? Where is the climax? I would have to say that the main conflict which has arisen in the play would be Nora's search for freedom and her search for her true identity. (including what she believes in, thinks is real, how she should be treated, discovering her true self etc.) Minor conlflicts lie within each character in A Doll's House. To start, Mrs. Linde did not follow her heart, leading her to a sad marriage and nothing left from it. She does gain the strength to later tell the truth and follow her heart to Krogstad. She also has inner conflicts with herself with how she has to support everybody around her, and to what extent she should support them. Krogstad has a minor conflict in that he is being fired because of his bad reputation and his loved one has returned into his life. With this being said, he is trying to redeem his reputation, but has to go to some low levels to accomplish his tasks. Anne-Marie was forced to give up her child to a complete stranger, just to work and have a life with the Helmers. Torvald has power and money struggles which lead him to behaving the way he does, with disrespect and rudeness to the ones he truly loves and cares about. Dr. Rank is dying and feels the need to confess his love to Nora, a married woman before it is too late to tell her. All of these conflicts, both internal and external, are all related because it forms a small little circle of drama within the characters lives. This drama circle, while a problem sometimes, is able to help a few of the characters solve their conflicts by supplying answers and reassurance from one another. I believe the climax would be when Nora finally stands up to Torvald and accepts her mistakes, and tells Torvald that she is leaving. I believe this showed a lot of character and strength on Nora's part, which is ultimately why I enjoyed the play in the end. ...read more.