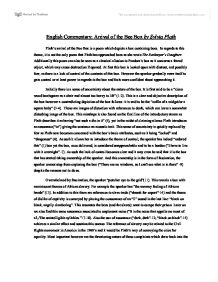 English Commentary: Arrival of the Bee Box by Sylvia Plath Plath's arrival of the Bee Box is a poem which depicts a box containing bees. In regards to this theme, it is not the only poem that Plath has approached bees as she wrote The Beekeeper's Daughter. Additionally this poem can also be seen as a classical allusion to Pandora's box as it concerns a feared object, which may cause destruction if opened. At first this box is looked upon with distrust, and possibly fear, as there is a lack of control of the contents of this box. However the speaker gradually rears itself to gain control or at least power in regards to the box and feels more confident about approaching it. Initially there is a sense of uncertainty about the nature of the box. It is first said to be a "clean wood box/square as a chair and almost too heavy to lift" (1-2). This is a clear and objective description of the box however a contradicting depiction of the box follows: it is said to be the "coffin of a midget/or a square baby" (3-4). These are images of distortion with references to death, which can leave a somewhat disturbing image of the box. ...read more.

The reference of slavery may be related to the Civil Rights movement in America in the 1960's and it would be Plath's way of conveying the cries for equality. Most important however are the threatening nature of these complaints which draw back into the theme of control and underline that the speaker still does not feel safe in regards to the box and its contents, especially as the content is alive and fervent. The speaker then ponders as to how to let the bees escape (16). However such a choice is not made as the threat of the bees build up. Firstly a buzzing sibilance,"It is the noise that appals me most of all" (17), echoes the presence of the bees but it also provokes confusion, destabilizing the speaker who becomes confused in regards to what the bees are trying to communicate with him ("The unintelligible syllables"-18). This lack of understanding can be understood as the bees are now even more threatening, they are now a "Roman mob" (19), a symbol of rebellion. In spite of the individual bee being harmless, it is the bee's nature as a swarm that impresses the speaker: "Small, taken one by one, but my god, together!"(20). ...read more.

Following this Plath makes another of her classical allusions, this one being the Greek myth of Daphne. This allusion is done to represent the extent to which the speaker, relishing the newly unveiled power, is now dreaming about what could be achieved with the bees, as now an extra touch of magical realism is added to the poem. In this trail of thoughts, the speaker refers to the ability to transform into a blond tree, the colour of honey, so as to appease the bees. The speaker also hopes to be ignored by the bees, dressed in a "moon suit and a funeral veil" (32). In this statement we can interpret the moon suit to be the usual beekeeper's suit, but more importantly the moon suit gives an imposing, and possibly bizarre, image of the speaker. Additionally we find again a reference to death sustaining the dark aspect of the poem. The specific reference to a funeral may imply that the speaker is now mourning over the chase for power with the bees. Irrespective of this, the speaker ceases day-dreaming and instead rationalizes that "I am no source of honey/So why should they turn on me?" (33-34). This provides a justification for setting the bees free without the fear of being attacked. ...read more.