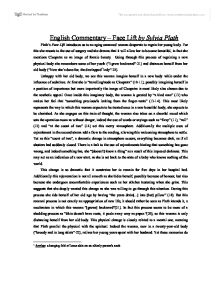 English Commentary - Face Lift by Sylvia Plath Plath's Face Lift introduces us to an aging unnamed woman desperate to regain her young body. For this she resorts to the use of surgery and she dreams that it will allow her to become beautiful, in fact she mentions Cleopatra as an image of female beauty. Going through this process of regaining a new physical body she remembers some of her youth ("I grow backward"-21) and distances herself from her old body ("Now she's done for, the dewlapped1 lady"-25). Unhappy with her old body, we see this woman imagine herself in a new body while under the influence of sedatives. At first she is "travelling/nude as Cleopatra" (10-11), possibly imagining herself in a position of importance but more importantly the image of Cleopatra is most likely also chosen due to the aesthetic appeal. Once inside this imaginary body, the woman is greeted by "a kind man" (13) who makes her feel that "something precious/is leaking from the finger-vents" (13-14). ...read more.

But this renewal process is not exactly an appropriation of new life; it should rather be seen as Plath intends it, a mechanism in which this woman "[grows] backward"(21). In fact this process seems to be more of a shedding process as "Skin doesn't have roots, it peels away easy as paper."(20), so this woman is only distancing herself from her old body. This physical change is closely related to a mental one, meaning that Plath parallel the physical with the spiritual. Indeed the woman, now in a twenty-year-old body ("broody and in long skirts"-22), relives her young years spent with her husband. Yet these memories do not seem clearly authentic, they have an artificial aspect due to the presence of a dead and stuffed poodle (23). This may mean that the woman cannot truly retrieve her past despite undergoing surgery, thus implying that Plath may want to convey that the physical world is not as hard-linked to the spiritual one as a first interpretation may suggest. ...read more.

"Nodding and rocking and fingering her thin hair."(30), serving as a way to remind the speaker that her old self is well alive. As such the only enemy that she has not managed to escape is time. Plath then returns to the result of the operation by having the woman say "I wake swaddled in gauze,/Pink and smooth as a baby."(31-32), presenting us with an image of a white cocoon (gauze). Instead of ending the poem, this has the effect of bringing us back to the beginning with the same image of a cocoon being used:" Whipping off your silk scarf, exhibiting the tight white/Mummy-cloths" (2-3). This effect supports the need that the woman displays to return to the beginning ("growing backwards"-21), this effect also being achieved by her reference to babies. What this poem then conveys is the path taken by a woman to escape old age by keeping her beauty intact, while also displaying a physical obsession of self. 1 dewlap: a hanging fold of loose skin on an elderly person's neck ?? ?? ?? ?? ...read more.