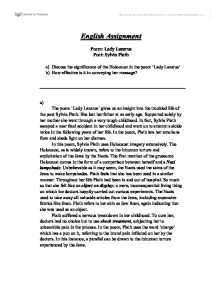 English Assignment Poem: Lady Lazarus Poet: Sylvia Plath a) Discuss the significance of the Holocaust in the poem 'Lady Lazarus' b) How effective is it in conveying her message? a) The poem 'Lady Lazarus' gives us an insight into the troubled life of the poet Sylvia Plath. She lost her father at an early age. Supported solely by her mother she went through a very rough childhood. In fact, Sylvia Plath escaped a near fatal accident in her childhood and went on to attempt suicide twice in the following years of her life. In the poem, Plath lets her emotions flow and sheds light on her distress. In this poem, Sylvia Plath uses Holocaust imagery extensively. The Holocaust, as is widely known, refers to the inhuman torture and exploitation of the Jews by the Nazis. The first mention of the gruesome Holocaust comes in the form of a comparison between herself and a Nazi lampshade. Unbelievable as it may seem, the Nazis used the skins of the Jews to make lampshades. ...read more.

Their golden teeth were plucked out and melted to make valuables such as wedding rings. Their corpses were then burnt to erase all trace of their existence. The mention of all this in the poem makes us believe that Sylvia Plath considered herself to be stifled, oppressed and exploited, just like the Jews. Finally, a striking similarity is noticed in the manner in which Plath chose to end her life and the methods used to exterminate the Jews. The Jews were killed in gas chambers where poisonous gases devoured their internal organs. Plath committed suicide by putting her head inside an oven, and died as a result of gas poisoning. In my opinion this was perhaps because she felt herself so alike the Jews that she preferred to end her life in the very same manner. Thus, we can safely conclude that Holocaust imagery forms a significant part of Sylvia Plath's poem 'Lady Lazarus'. b) After critically analyzing the poem, the Holocaust imagery which has been used widely, seems fairly effective in conveying the poet's message. ...read more.

Plath on the other hand had attempted suicide twice. This is a glaring difference between Plath's life and the Holocaust, making it quite ineffective in conveying her message. Another important difference is that the Holocaust was a planned genocide which involved the death of approximately six million people. Plath's comparison seems quite irrelevant in this aspect, as she talks about the death of a single person (herself). Finally, one of the most important differences is that Plath considered death to be a performance. At the end of the poem, Plath says that she was about to rise like a phoenix, referring to her own death. To her, attaining death was like being resurrected, as she would be freed from her troubled life. Plath believed death to be a means of attaining victory over life. She clearly mentions that when she survived her second suicide attempt, it was a theatrical comeback. In comparison, the Holocaust was only about forcing people into giving up their lives. Thus, in my opinion, taking these factors and many more subtle differences onto consideration, the Holocaust imagery is fairly effective in conveying Plath's message. Word count: 915 words. Written by, Adwait Mane, IB- 11. ...read more.