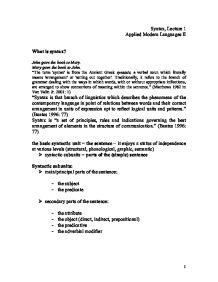 Syntax. Syntax is a set of principles, rules and indications governing the best arrangement of elements in the structure of communication. (Bantas 1996: 77)

Syntax, Lecture 1 Applied Modern Languages II What is syntax? John gave the book to Mary. Mary gave the book to John. "The term 'syntax' is from the Ancient Greek syntaxis, a verbal noun which literally means 'arrangement' or 'setting out together'. Traditionally, it refers to the branch of grammar dealing with the ways in which words, with or without appropriate inflections, are arranged to show connections of meaning within the sentence." (Matthews 1982 in Van Valin Jr. 2001: 1) "Syntax is that branch of linguistics which describes the phenomena of the contemporary language in point of relations between words and their correct arrangement in units of expression apt to reflect logical units and patterns." (Bantas 1996: 77) Syntax is "a set of principles, rules and indications governing the best arrangement of elements in the structure of communication." (Bantas 1996: 77) ...read more.

Status or grammatical dependence. (Bantas 1996: 81) 1) The purpose of communication: Declarative sentences (also known as statements): > "affirm, declare, or state something (positive or negative) usually without emotional implication" (Bantas 1996: 82); > are defined by a certain word order, following the pattern Subject^Predicate^Object: They bought a new flat. > the verb is usually in the indicative mood. Interrogative sentences: > "are expressions of the speaker's/writer's curiosity"; > word order generally involves partial inversion, following the pattern Auxiliary^Subject: Does he practise the piano every day? or full inversion, e.g. in the case of the verb to be: Is she at home? (Predicate^Subject) > they can be further classified into several types, for example general questions - "yes" or "no" questions or special/particular questions - Wh- questions etc. (Bantas 1996: 85-86) Imperative sentences: > include commands, requests, invitations: Come here! ...read more.

The complex sentence "is a unit of thinking made up of one or more main/principal clauses and one or more subordinate clauses" (Bantas 1996: 87). > the term complex is employed here in the sense of subordination/embedding (different levels): Mary said that she hadn't been there. If she had come, I would have seen her. My brother, who is in Austria, is coming home for Easter. (3) Status/dependence: > independent sentences (isolated); > independent clauses (as parts of a compound sentence); > main/principal/head clauses (in complex sentences); > subordinate/secondary clauses (in complex sentences). Sentences may also be classified as: > Finite or non-finite (according to the form of the verb): They are laughing. The girl was walking down the street, singing a song. > Personal or impersonal (according to the nature of the subject): The professor is a specialist in applied linguistics. ...read more.