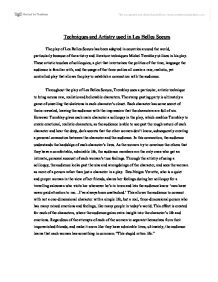 Techniques and Artistry used in Les Belles Soeurs The play of Les Belles Soeurs has been adapted in countries around the world, particularly because of the artistry and literature techniques Michel Tremblay utilizes in his play. These artistic touches of soliloquies, a plot that intertwines the politics of the time, language the audience is familiar with, and the usage of the three unities all create a raw, realistic, yet controlled play that allows the play to establish a connection with the audience. Throughout the play of Les Belles Soeurs, Tremblay uses a particular, artistic technique to bring across raw, realistic and believable characters. The stamp pasting party is ultimately a game of unveiling the skeletons in each character's closet. Each character has some secret of theirs revealed, leaving the audience with the impression that the characters are full of sin. However Tremblay gives each main character a soliloquy in the play, which enables Tremblay to create emotional, realistic characters, as the audience is able to see past the rough nature of each character and hear the deep, dark secrets that the other women don't know, subsequently creating a personal connection between the character and the audience. ...read more.

p.75 when they find out Angeline associates herself with Pierrette. However, they are anything but a civilised group. Around one another, the women are chatty, fowl mouthed and jealous. This contrasting portrayal of the women allows Tremblay to create two storylines in his play: one of the lives of Germaine and her family, and the other of Quebec and its role as a province in Canada. In creating characters with backstabbing, hypocritical personalities, Tremblay is able to interweave his personal opinion of Quebec sovereignty as he uses the characters as metaphors for Canadian politics. Canada took pride in its image of being a country that supported other cultures, yet Quebec was not fully bilingual to the extent it wanted to be, and Canada had a hard time accepting this fact in the 1960s, representing a hypocritical government. Germaine Lauzon is a metaphor for the province of Quebec, as she is taken advantage of, but rather than fight for her rights, she allows her friends and family (metaphors for the rest of Canada) to take her personal stamps. In this metaphor, Tremblay brings across his belief that Quebec is a province constantly taken advantage of by Canada, and instead of fighting for its rights, it merely stands ...read more.

Les Belles Soeurs takes place in only the living room of Germaine Lauzon, obeying the unity of space, occurs in approximately two hours- the running time of the play, while having one main direct focus of the play- the lives of the fifteen women. These unities allow the audience to focuse directly on the play, as there are few subplots or changes of scenery to comprehend. In analyzing the techniques used by Tremblay in Les Belles Soeurs, it can be determined that the artistry of which Tremblay applies the use of soliloquies, politics, language and the Three Unities create the raw, emotional play aspects of the play. By allowing the audience special insight into the lives of the character, the audience creates a bond with the characters, while being able to feel a connection and comfort in the Joual form in which the characters speak in. The personal input of Quebec politics gives the audience a further connection to the play, as the Separatism Movement is a period in which defined modern-era Canada, and a issue dear to the hears of many Quebecois. Tremblay is able to focus and control his entire play by employing the Three Unities, giving a sense of direction to the play, while not forcing a specific opinion of politics, or ethics upon the audience. ?? ?? ?? ?? ...read more.