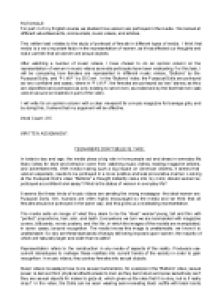 ﻿RATIONALE: For part 2 of my English course we studied how women are portrayed in the media. We looked at different advertisements, commercials, music videos, and articles. This written task relates to the study of portrayal of female in different types of media. I think that media is a very important factor in the representation of women, as it has affected our thoughts and make us think that all women are sexual objects. After watching a number of music videos, I have chosen to do an opinion column on the representation of women in music videos as media portrayals have been misleading. For this task, I will be comparing how females are represented in different music videos, ?Buttons? by the Pussycat Dolls, and ?P.I.M.P? by 50 Cent . In the ?Buttons? video, the Pussycat Dolls are portrayed as very confident and sassy, where in ?P.I.M.P?, the females are portrayed as ?sex? slaves, as they are objectified and portrayed as only existing to serve men, as evidenced by the fact that men walk women around on leashes in part of the video. ...read more.

Music videos nowadays have more sexual mannerisms, for example in the ?Buttons? video, sexual power is derived from physical attractiveness to men as they bend down and pose seductively as if they are sexual objects for males to gaze at, which gives us the idea that it is okay, but is it really okay? In the video, the Dolls can be seen wearing semi-revealing black outfits with black boots. Then they position themselves around a pole, which is similar to pole dancing. Nicole Scherzinger also can be seen using a chair as a prop to circulate around in a flirtatious manner, performing a striptease. The floor also ignites when the Dolls crouch down suggesting the Dolls as hot, sexy, sassy females who are confident about passive female sexuality. Close up shots of body parts, touching of your own body parts, partial skin exposures are all other examples of sexual objectify. This video also uses provocative male addresses challenging Snoop to ?loosen up my buttons babe?, but however the Dolls prove that they are ?too hot to handle? for Snoop. ...read more.

Women become sexual objects when their bodies and sexuality are linked to products. Advertisements that display sections of women?s bodies?thighs, breasts, legs, etc.?as opposed to the bodies in their entirety reinforce the erroneous notion that women are objects rather than human beings. As I grew up watching music videos from different generations, one thing I could see was that music videos were becoming more and more sexual. Are females really just sex objects? Are females presented to please men? Females shouldn?t be rewarded for their sexual behavior through fame and money as young people will think that it is the correct idea of how women are portrayed and they will try to do this as a way of being valuable to the society and to gain attention. Do you really think that this is going to change the world? What kind of music videos will the next generation see? Will they still be music videos or will they eventually become pornography? Please think about the kids of the future generations, we do not want the children to think that it is okay for doing all these sexual things in order to please men. Are there really no other ways of being successful in today?s society? Word Count: 960 ...read more.