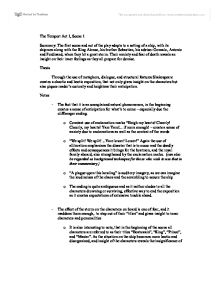 The Tempest Act 1, Scene 1 Summary: The first scene and act of the play adapts to a setting of a ship, with its shipmen along with the King Alonso, his brother Sebastian, his advisor Gonzalo, Antonio and Ferdinand, when they hit a great storm. Their anxiety and fear of death reveals an insight on their inner feelings as they all prepare for demise. Thesis Through the use of metaphors, dialogue, and structural features Shakespeare creates a chaotic and hectic exposition, that not only gives insight on the characters but also piques reader's curiosity and heightens their anticipation. Notes - The fact that it is an unexplained natural phenomenon, in the beginning creates a sense of anticipation for what's to come - especially due the cliffhanger ending. o Constant use of exclamation marks "Heigh my hearts! Cheerly! Cheerly, my hearts! Yare Yare!... if room enough! ...read more.

- The effect of the storm on the characters on board is one of fear, and it maddens them enough, to step out of their "titles" and gives insight to inner characters and personalities o It is also interesting to note, that in the beginning of the scene all characters are referred to as their titles "Boatswain", "King", "Prince", and "Master". As the situation on the ship becomes more hectic and disorganized, and insight of the characters reveals the insignificance of the titles and the pretense behind them. "None that I more love... Out of our way I say". Here the boatswain not only informed the King's most trusted man that he valued his life more than the Royals but also that as a councilor he was useless to the situation and should just step aside and pray to god, thanking him for such a long life (which also eludes to Gonzalo as a older wiser man). ...read more.

is again used against the Boatswain but again he is mocking the ship, as opposed to insulting the Boatswain o On the other hand, characters such as Antonio and Sebastian are quite the opposite * Each of their first dialogues reflects their inner personalities * Sebastian - "A pox o' your throat...incharitable dog" * Antonio - "Hand, cur...than thou art" Both can be seen as rude and brash characters, much the villains of the play, Shakespeare's use of short staccato like statements for both instead of long flowing sentences also embodies their characters as it adds a very rough and abrupt tone to their speech, unlike Gonzalo's soft and serene tone * Antonio and Sebastian's diffidence toward the boatswain on account of their status is the first demonstration in the play of social hierarchy, which eludes to this issue becoming an important theme in the play. ...read more.