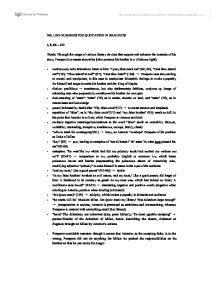 NB: LINE NUMBERS FOR QUOTATION IN BRACKETS I, ii, 66 - 132 Thesis: Through the usage of various literary devices that support and enhance the contents of his story, Prospero is a master storyteller [who portrays his brother in a villainous light]. - continuously tells Miranda to listen to him: "I pray thee mark me" (68, 88), "Dost thou attend me?"(78), "Thou attend'st not?" (87), "Dost thou hear?" (106) � Prospero uses story-telling to control and manipulate, in this case to manipulate Miranda's feelings to evoke sympathy for himself and anger towards his brother and the King of Naples - diction: perfidious � treacherous, but also deliberately faithless, conjures up image of scheming man who purposefully overthrows his brother for own gain - dual-meaning of "state": "state" (70) as in estate, domain or land, and "state" (76), as in mental state and knowledge - pause (indicated by dash) ...read more.

� simile - "in my false brother/ Awaked an evil nature, and my trust,/ Like a good parent, did beget of him/ A falsehood in its contrary as great/ As my trust was, which had indeed no limit,/ A confidence sans bound" (92-97) � alternating negative and positive words (negative when alluding to Antonio, positive when alluding to himself) - "Me (poor man)" (109) � self-pity, which incites sympathy in Miranda and audience - "he needs will be/ Absolute Milan. Me (poor man) my library/ Was dukedom large enough" � juxtaposition in actions, Antonio is portrayed as ambitious and overreaching, whereas Prospero is content with something small (his library) - "bend/ The dukedom, yet unbowed (alas, poor Milan!),/ To most ignoble stooping" � personification of the dukedom of Milan, hence describing the shame, dishonor or disgrace brought to Milan by Antonio's actions - Prospero unreliable narrator: though it seems that Antonio, as ...read more.

* Stories become more and more elaborate to achieve desired effect of intimidation ("I must / Once in a month recount what thou hast been,/ Which thou forgest'st") * Uses many words with negatively connotations when talking about Sycorax ("This damned witch Sycorax", "earthy and abhorred commands", "grand hests", "her most unmitigable rage") * Describes Sycorax's magic as "sorceries", while his magic is "art" � manipulates Ariel's feelings to his own advantage - when Ariel protests against the difficult tasks Prospero assigns him, Prospero launches into a tale that is meant to frighten and intimidate - by the end of the tale, Ariel is so frightened by the images that Prospero implants that he is obedient and docile, calling Prospero "noble master" - it is difficult to sympathize with Prospero in this episode, as it is apparent that he deliberately manipulates Ariel to do his bidding willingly - the power dynamic of Prospero as master is established ...read more.