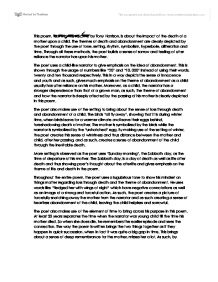 This poem, Testing the Reality by Tony Harrison, is about the impact of the death of a mother upon a child. The themes of death and abandonment are clearly depicted by the poet through the use of tone, setting, rhythm, symbolism, hyperbole, alliteration and time. Through all these methods, the poet builds a sense of sorrow and feeling of utter reliance the narrator has upon his mother. The poet uses a child-like narrator to give emphasis on the idea of abandonment. This is shown through the usage of numbers like "20" and "10, 000" instead of using their words, twenty and ten thousand respectively. This in a way depicts the sense of innocence and youth and as such, gives much emphasis on the theme of abandonment as a child usually has utter reliance on his mother. Moreover, as a child, the narrator has a stronger dependence than that of a grown man, as such, the theme of abandonment and how the narrator is deeply affected by the passing of his mother is clearly depicted in this poem. ...read more.

At least 30 years separates the time when the narrator was young child till the time his mother died. So when she does die, he remembers the earlier episode and sees the connection. The way the poem is written brings the two things together as if they happen in quick succession, when in fact it was quite a big gap in time. This brings about a sense of deep remembrance for the mother, misses her a lot. As such, by making use of the element of time, the poet manages to show readers the feelings of the narrator after being left alone and abandoned through the process of death. The birds were "flocking", which in itself indicates large numbers. They "crammed" the church roof as if there was no room for any more. Their noises were very loud. There were so many that he could only guess at their numbers and those numbers still grew. The poet uses the great magnitude of birds to show the magnitude of this event in the narrator's eyes. ...read more.

There is much significance in the title Testing the Reality, the poet should be referring to the fusing of the two periods of time into the same time in the narrator's mind. This smart usage of the element of time, helps to bring across the idea that the narrator is in a state of mental instability, due to the sudden loss of a mother whom the narrator had utter reliance on. And as such, the poet is "Testing the Reality" in the sense that he is fusing the two time periods together as though they occurred simultaneously, when in fact, the time gap was more than 30 years. At the end of the poem, we readers are left with the touching picture of a little boy watching a flock of birds fly away and, superimposed on that, the image of the same person in his later years remembering the death of his mother, like a photographic double exposure. ...read more.