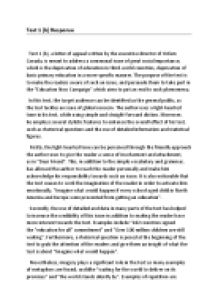 Text Response - Text 1 (b), a letter of appeal written by the executive director of Oxfam Canada

﻿Text 1 (b) Response ________________ Text 1 (b), a letter of appeal written by the executive director of Oxfam Canada, is meant to address a communal issue of great social importance, which is the deprivation of education in third-world countries, deprivation of basic primary education in a more specific manner. The purpose of the text is to make the readers aware of such an issue, and persuade them to take part in the ?Education Now Campaign? which aims to put an end to such phenomena. In this text, the target audience can be identified as the general public, as the text tackles an issue of global concern. ...read more.

Secondly, the use of detailed and data in many parts of the text has helped to increase the credibility of this issue in addition to making the reader have more interest towards the text. Examples include ?182 countries signed the ?education for all? commitment? and ?Over 100 million children are still waiting?. Furthermore, a rhetorical question is posed at the beginning of the text to grab the attention of the readers and give them an insight of what the text is about ?Imagine what would happen?. Nevertheless, imagery plays a significant role in the text as many examples of metaphors are found, suchlike ?waiting for the world to deliver on its promises? and ?the world stands silently by?. ...read more.

A wide picture with a more detailed account is gradually introduced to the readers as the text progresses. Additionally, the uses of short sentences help to communicate with the reader by giving clear statements and phrases. In my opinion, I believe that the text is perfectly structured in a way that enables it to communicate directly and clearly with the readers, urging them to take part of the ongoing campaign whose purpose is to create a better world. The text covers all aspects of such an issue by proposing all factors to be taken into consideration, whether it was funding, donation, or decision making. Thus, it can be said that the text successfully depicts its issue. Thaer Al-Kilani 11IB 1 English A1 ...read more.