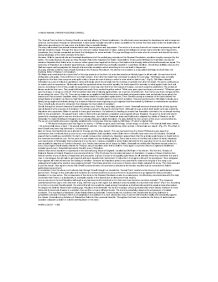 11/09/08 ANIMAL FARM BY-GEORGE ORWELL The 'Animal Farm' written by George Orwell is a satirical allegory of Soviet totalitarisim. He effectively communicates the development and emergence of Soviet Communism through an animal fable. A democratic socialist himself he draws a parallel to the events that took place under the leadership of Stalin who according to him was more of a dictator than a socialist leader. The story talks about how animal revolutionaries oust human power and oppression. The intent is to convey that with no human overpowering them all animals would be equal. Through the story one comes to realize disparities of class, status and intelligence corrupt many animals mind. Superiority complexes, lies, threats manipulate and twist the ideologies for some animals. The pigs and dogs are the ones who do no work and benefit the most, taking advantage of the other animals of the farm. Likewise, Stalin's tyrannical rule and eventual abandonment of the underlying principles of the Russian Revolution; socialism is aptly conveyed by the author. He wisely depicts the pigs as many Russian Rulers like Napoleon for Stalin, Snowball for Trotsky and Old Major for Karl Marx. During the narration Napoleon like Stalin turns to a more violent government against the theory of Animalism that strongly believed that all animals are equal. The hypocrisy of Napoleon as a dictator against liberty, equality and fraternity eventually resulted in a pointless rebellion. ...read more.

Orwell through his second character Snowball portrays Leon Trotsky, a secondary power to Lenin. Snowball has been described as a lively pig who was dedicated to the success of Animalism. He actively worked to change the Animal Farm. Although he was a short lived leader and was ousted by Napoleon who represents Stalin he proved to have good intentions. He believed in rebelling to ensure that Animalism continues. He continued working hard for the animal farm. He argued that in order to defend the animal farm a rebellion was required all over England. He gave his heart and soul to spread this message and to improve the farm's infrastructure. Just like the Proletariat class and Bolshevik's adapted the ideals of Marxism so did Snowball. He made Old Major's thoughts into an actual philosophy called Animalism. He also drafted the first version of the seven commandments. The seven commandments were originally established to encompass theories made by Old Major. Of which included that: < "Whatever that goes upon two legs in an enemy. < Whatever goes upon four legs, or has wings, is a friend. < No animal shall wear clothes. < No animal shall sleep in bad. < No animal shall drink alcohol. < No animal shall kill any other animal. < All animals are equal." (Pg- 27). This infact is what Orwell may have truly believed in. Unfortunately later on these commandments were altered for the pigs and the dogs benefit. ...read more.

The comparisons of this book to the Russian Revolution make it a masterpiece. He effectively communicates with the help of animals that if there is a dictatorship it eventually results in the destruction of elements of that society. As one can see in the end Napoleon although a pig has become like mankind or is it that men have become more like animals? "The creatures outside looked from pig to man and man to pig, and from pig to man again; but already it was impossible to say which was which" '(Pg-118). According to me this is not what Orwell wanted. He wished that all men would be equal among themselves and all animals would be equal among themselves. He targets the Stalinist Russia with feuding pigs; Napoleon and Snowball. His book's message criticizing dictatorship which attacks freedom of many kinds and ill conceived dreams of a problem free world is on many different levels. The book successfully captures the progression of a failed revolution. The emphasis of Napoleon; Stalin falsely Blaming Snowball; Trotsky leads me to believe that Orwell while decrying Stalinism is sympathetic towards Trotskism which is an adaptation of socialism in a more democratic way. It seems that Orwell is totally and completely against the misuse of socialism by dictators of Russia like Stalin for their personal benefits. Throughout his book he condemns the theory of authoritarian socialism adopted by Stalin in real life and Napoleon in the book. WORD COUNT - 1,493 ...read more.