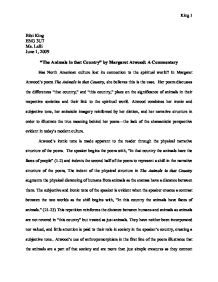 The Animals in that Country Essay

Bibi King ENG 3U7 Ms. Lalli June 1, 2009 "The Animals in that Country" by Margaret Atwood: A Commentary Has North American culture lost its connection to the spiritual world? In Margaret Atwood's poem The Animals in that Country, she believes this is the case. Her poem discusses the differences "that country," and "this country," place on the significance of animals in their respective societies and their link to the spiritual world. Atwood combines her ironic and subjective tone, her animistic imagery reinforced by her diction, and her narrative structure in order to illustrate the true meaning behind her poem-the lack of the shamanistic perspective evident in today's modern culture. Atwood's ironic tone is made apparent to the reader through the physical narrative structure of the poem. The speaker begins the poem with, "In that country the animals have the faces of people" (1-2) and indents the second half of the poem to represent a shift in the narrative structure of the poem, The indent of the physical structure in The Animals in that Country augments the physical distancing of humans from animals as the stanzas have a distance between them. ...read more.

(28-29) This emphasizes the speaker's hostility towards the West by reinforcing the belief that they have lost all ties to their spiritual self. Atwood uses imagery in The Animals in that Country to show that the disconnection between humans and nature causes nature to become unnatural. This is evident as she contrasts the death of animals in both a natural form and a manufactured form in her poem. The imagery of death in the natural world is supported by diction that provides an elegance and sacredness to the death of an animal. For example, the speaker states, "The fox run politely to the earth, huntsmen standing around him, fixed in their tapestry of manners," (5-8) "the ceremonial cats," (3) and "an elegant death" (11) to describe the importance of animals in that society. This contrasts with the second half, in which the speaker's diction shifts to criticize the loss of a shamanistic connection in North American society. "Their eyes flash once in car headlights and are gone. ...read more.

Furthermore, Atwood uses static diction to reinforce the immortality of animals as seen through the words "fixed," (7) "stamped," (18) and "resonant" (18) creating the effect that the animals are necessary in connecting to the spiritual world. In contrast to her use of spatial aesthetics, she employs temporal aesthetics to show that animals are not important in today's society. This is evident as "their eyes flash once" (24-25) showing that they are not permanent in time but are mortal. This illustrates the disconnection of humans from the spiritual world as the animals are not of importance anymore. Margaret Atwood criticizes our disconnection through her narrative structure, imagery and diction. The poem is written from a shamanistic perspective as the speaker tries to convince the reader that this connection is important but missing in today's civilized society. The animals are sacred in shamanism as they connect human beings to the spiritual world and in this poem the speaker becomes the healer as they expose the flaws in western society and try to make human beings aware of their connection to animals so that they can reconnect with their spiritual selves. ?? ?? ?? ?? King 1 ...read more.