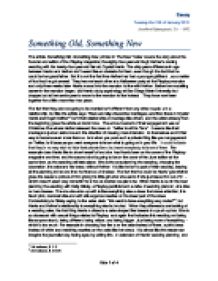 The article Something Old, Something New printed in The New Yorker covers the story about the founder and editor of the Playboy magazine; the eighty-four-year-old Hugh Hefners coming wedding with his twenty-four-year-old fianc, Crystal Harris.

Something Old, Something New The article Something Old, Something New printed in The New Yorker covers the story about the founder and editor of the Playboy magazine; the eighty-four-year-old Hugh Hefner's coming wedding with his twenty-four-year-old fianc�, Crystal Harris. The sixty years difference in age between Harris and Hefner don't seem like an obstacle for them, even though the fact that he could be her grandfather. But it is not the first time Hefner had had a younger girlfriend, as a matter of fact had he got several. They two met each other at a Halloween party at the Playboy mansion and only three weeks later Harris moved into the mansion to live with Hefner. Before her modelling career in the mansion began, did Harris study psychology at San Diego State University but dropped out at her senior year to move to the mansion to live instead. They have now been together for a little more than two years. The fact that they are now going to be married isn't different from any other couples in a relationship, but like the article says "there are May-December marriages, and then there is Crystal Harris and Hugh Heffner"1 isn't their relationship or marriage like others and the writer already from the beginning gives the article an ironic tone. ...read more.

The illustration ironically underlines the article's representation of her. But not even is the writer using irony and wordplay in the body and illustration of the article but also in the title. The title called something old, something new is taken out of a traditional rhyme; something old, something new, something borrowed, something blue, about what a bride should wear at her wedding for good luck. The ironic about the title is that Hefner and Harris together indicate the old and the new as a couple. Hugh Heffner is as earlier mentioned 60 years older than Harris and therefore the article paints a portrait of him as an old pig who loves younger good-looking women. In the end of the article when Harris is choosing the cake for the wedding she talks of Hefner daily routine in having chicken-noodle soup every day at five o' clock. It gives an ironic picture of him as an old man sitting in a nursing home, eating the same thing every single day. You can just picture yourself an old grumpy man bended over his soup, slurping. But the fact that he has established the worldwide magazine Playboy makes him a prosperous and rich man whose trademark is fame and money. ...read more.

Nonetheless, gives he her his kids' nanny's phone number, as a secret and safe lifeline between them. Ligefrem ordstilling = er mest almindeligt p� engelsk i b�de hoved- og bis�tninger. Engelsk har ligefrem ordstilling f�r s�tningen indledes med et adverbium = nonetheless, he gives Nonetheless, he gives her his kids' nanny's phone number ... The cleaver thing is that he haven't written the last digit, which is the number "four" in the line, so she has to learn it by heart. Stavefejl: clever = kloge Kongruensfejl: He = 3. Person ental, s� i nutid tager verballedet 's': hasn't The clever thing is that he hasn't written the last digit ... We know that time have changed because she has got a husband and a daughter afterwards. Kongruensfejl: Time = 3. Person ental, s� i f�rnutid tager verballedet 's': has We know that time has changed ... In that moment she was besotted by him and didn't though about the opportunity she had just been given Stavefejl: endelsen skal have et 't' p�, for at ordet f�r den rette betydning Thought = t�nkte In that moment she was besotted by him and didn't thought about ... 1 1st column, ll. 1-3 2 3rd column, ll. 23-24 ?? ?? ?? ?? Essay Tuesday the 10th of January 2012 Josefine Kj�rsgaard, 3.h - MfG Side 1 af 4 ...read more.