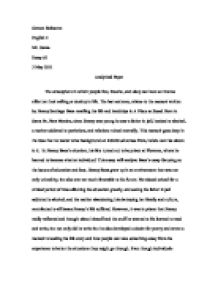 The atmosphere in which people live, breathe, and sleep can have an intense effect on their calling or destiny in life. The last sentence, relates to the memoir written by Jimmy Santiago Baca recalling his life and hardships in A Place to Stand.

The atmosphere in which people live, breathe, and sleep can have an intense effect on their calling or destiny in life. The last sentence, relates to the memoir written by Jimmy Santiago Baca recalling his life and hardships in A Place to Stand. Born in Santa Fe, New Mexico, since Jimmy was young he saw a father in jail, hooked to alcohol, a mother addicted to patriotism, and relations ruined mentally. This memoir goes deep in the idea that no matter what background an individual comes from, he/she can rise above in it.  In Jimmy Baca’s situation, his fate turned out to be prison at Florence, where he learned to become a better individual. This essay will analyze Baca’s essay focusing on the issues of education and loss. Jimmy Baca grew up in an environment that was not only unhealthy, but also one not much favorable to his future. He missed school for a critical period of time affecting his education greatly, and seeing his father in jail addicted to alcohol, and his mother abandoning him betraying her family and culture, contributed to all losses Jimmy’s life suffered. However, it was in prison that Jimmy really reflected and thought about himself and the stuff he wanted to He learned to read and write, but not only did he write but he also developed a desire for poetry and wrote a memoir revealing his life story and how people can take something away from his experience to better the situations they might go through. Even though individuals shouldn’t let the circumstances determine their destiny, there are unavoidable adversities that come to all and the outcomes can be serious, having a big impact in life.

The first issue covering is education. Education is very important in every society out there and sets the status of lower or higher level of people in the world. Focusing on the U.S., education is the way to a successful life and ultimately the American dream. Many people go around wondering, is there something better out there?   If it's taking some inevitable steps to become mature, becoming a better person from the inside-out, or just pursuing themselves education wise, those people who go around, usually after a period of trials, in the end succeed in what they are trying to succeed in.   When it came Jimmy Santiago Baca’s turn in his memoir "A Place to Stand" he had to take a good look at his life, and way of living, persuade himself that he will be better, and at some point defeat a lot of his problems in his life so that he could achieve his main goal of getting over illiteracy, and learning to read and write. This is what makes education important in his memoir. Jimmy decides he doesn't want to be illiterate forever and while he’s in prison he makes sure to change that. After deciding to write a letter to Harry, he discovers that his passion lies in writing poetry “Writing for me was my connection to the streets, to someone out there.” So writing provided Baca as an escape to prevent insanity through long months in isolation and the years in jail. Because of his behavior, Jimmy is placed in isolation, where he spent his Twenty-third birthday and the humiliation of being stripped and searched, is what influences his decision of education. Being alone there, made him think about it a lot, making it be another significant factor for his decision. Another factor that affected this, was when he was young and he ran away from the orphanage. Loosing a period of time of being at school, affected his intellect notably, and by the time he entered Jr. High, his academic skills were lower than those of the other children. But the most notable event that started the urge of Jimmy to learn how to read and write, was when on a Christmas, he received a letter from a Christian missionary. This was the first time someone had sent a letter to him and so he attempted to write back as best as possible, the missionary sent him a dictionary and so on his poetic career came to be.

This memoir gives consideration and examines the result of the prison system on the lives of men and women. Jimmy describes prison as "the most frightening nightmare I have ever experienced". This is only one of his many losses that he experiences, during his troubled life. After growing up, and being the youngest of three children, Baca has to witness his drunken and playboy father destroy the marriage he had with his mother, and ended up in a new home with his grandparents at the age of two. Baca became unaffected by certain trials. These trials had in a way started a domino effect in Baca's life.  After the sudden lost of his grandfather, it seemed his life couldn't get any better, since the losses in his world continued. When it seemed his life had acquired some purpose, being taken under the wing of the football coach and becoming a really good player, Mieyo took him to be plumbers, so he lost his greatness in football. Later on however, Mieyo joined the army and left Jimmy on his own again. Jimmy losses Mieyo but eventually finds love with a girl he meets, Theresa. This was the first relationship he had since he had come out of jail, and it became a not so good one. Jimmy already had issues with trust, especially in females, and soon enough she left him, only using him for physical pleasure. He got his heart broken , adding pain to his heart out of all the losses he had already experienced. Baca however, didn't give up and moved on moving to San Diego to start a new life. After being deported form New Mexico, Jimmy was put to jail up in Yuma County for a crime he felt was innocent for. He calls his sister asking her for money, but she turns her back on him too. Having nobody, with everyone turning their back on him he just decides  for time to take over his life. “I had made up my mind to blend in, attract no attention, do my time, and get out alive.” His losses are so overwhelming that he basically doesn't care about living anymore. During his time in prison he constantly thinks about the past and what could of have influenced in his life turning out like this. He had a big problem of mistrust since everyone he had ever put his trust in to, had left him. His mother, for a white men, his sister married and had no time for him, Mieyo, Theresa and ultimately his role model: his grandfather. Practically his life was meaningless before him, he had nothing. “I was lost in shifting phantoms of the past, and yet I still struggle to reach a present that seemed beyond my grasp. Time and space were jumbled in my mind.”

Jimmy Baca grew up in an atmosphere that was not only harmful, but more so bad to his future. He didn’t learned to read or write until he had the desire to do so in jail. This made him want to be a better man, and writing poetry showed him how beautiful life really is. He experienced many losses in life, but he was able to carry out and move on in life. Witnessing his father in jail and addicted to alcohol, his mother leaving him, along with the love of his life and loosing his grandfather and ending up in jail was really tough to handle. However, it was in prison that Jimmy really got a hold of himself and learned to read and write. Not only did he write but he developed a desire and passion for poetry and wrote a memoir exposing his life so that people could see that even through the hardest do hardships, everyone can achieve success. Although individuals shouldn't let circumstances determine people’s destiny. There are inevitable tribulations that come and the results can be bad and life changing.