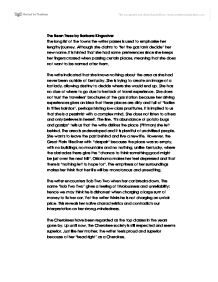 The Bean Trees by Barbara Kingsolver

The Bean Trees by Barbara Kingsolver The long list of the towns the writer passes is used to emphasise her lengthy journey. Although she claims to "let the gas tank decide" her new name, it is hinted that she had some preferences since she keeps her fingers crossed when passing certain places, meaning that she does not want to be named after them. The write indicated that she knows nothing about the area as she had never been outside of Kentucky. She is trying to create an image of a lost lady, allowing destiny to decide where she would end up. ...read more.

she left behind. The area is undeveloped and it is plentiful of uncivilised people. She wants to leave the past behind and live a new life. However, the Great Plain filled her with "despair" because the place was so empty, with no buildings, no mountains and no nothing, unlike Kentucky, where the obstacles there give the "chance to think something good might be just over the next hill". Oklahoma makes her feel depressed and that there is "nothing left to hope for". The emptiness of her surroundings makes her think that her life will be monotonous and unexciting. The writer encounters Bob Two Two when her car breaks down. ...read more.

Just like her mother, the writer feels proud and superior because of her 'head right' as a Cherokee. We learn that the passage is written in a colloquial style as seen in the line, "I wasn't crazy about anything I had been called up to that point in life". She not only uses verb conjugation and contraction, but writes in a casual style of a woman who simply wants to express her feelings to the world. Through the passage, the writer tries to give an idea of the world being a risky place and the unjustness of life by the numerous unfortunate events she undergoes, like coming across Bob Two Two who cheated on her money and how she was born in the scandalous city of Pittman. ?? ?? ?? ?? ...read more.