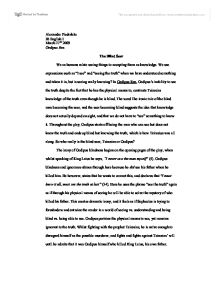 Alexandra Piedrahita IB English I March 17th 2009 Oedipus Rex The Blind Seer We as humans relate seeing things to accepting them as knowledge. We use expressions such as "I see" and "seeing the truth" when we have understood something and taken it in, but is seeing really knowing? In Oedipus Rex, Oedipus's inability to see the truth despite the fact that he has the physical means to, contrasts Teiresias knowledge of the truth even though he is blind. The word The ironic tale of the blind man becoming the seer, and the seer becoming blind suggests the idea that knowledge does not actually depend on sight, and that we do not have to "see" something to know it. Throughout the play, Oedipus starts off being the man who can see but does not know the truth and ends up blind but knowing the truth, which is how Teiresius was all along. So who really is the blind seer, Teiresias or Oedipus? The irony of Oedipus blindness begins on the opening pages of the play, when whilst speaking of King Laius he says, "I never saw the man myself" (4). ...read more.

A lot of the irony of Oedipus' blindness also occurs at the end of the play, when Oedipus makes himself literally and physically blind. "..., he digs them down the sockets of his eyes, crying, 'You, you'll see no more the pain I suffered, all the pain I caused! Too long you looked on the ones you never should have seen, blind to the ones you longed to see, to know! Blind from this hour on! Blind in the darkness-blind!'" (46) At this point, Oedipus is confirming a line said early by Teiresius that "to see the truth when the truth is only pain to him who sees!" (6). Oedipus is now in exactly the same position that Teiresius was when he mocked him, physically blind but seeing the truth. Teiresius, the blind prophet, happens to be one of the very few people to know who Oedipus really is and what he has done. He knows that because he possesses this information he is at a certain advantage over everyone, even considering the fact that he is blind, however he wishes he did not know the truth, and this is evident when he says "How terrible - to see the truth when the truth is only pain to him who sees!" ...read more.

We know that Teiresius is a prophet, however he can not see, on the other hand Oedipus can see, but does not have light to the real truth until the seer (as in prophet, being Teiresius) reveals it to him. Both Teiresius and Oedipus are blind seers in their own ways, and each in several ways. Oedipus is a blind seer by the literal definitions, being that he used to be a seer and is now blind. Oedipus is also a blind seer in the way that he is a seer (someone who sees), but is blind to the truth. Teiresius on the other hand, is a blind seer in its second literal definition, being a prophet who is blind. He is also a blind seer in the sense that he is literally blind, but figuratively a seer. This phrase has 4 interpretations, all correct, and all adding to the dramatic irony of the play. The two characters' progressions throughout the play, Teiresius' from the blind prophet to the all-knowing man who sees reveals the truth to the city, and Oedipus progression from the admirable King of Thebes who seeks the truth until he finds it, making himself blind, contrast each other, but in reality are more similar than one would expect. ...read more.