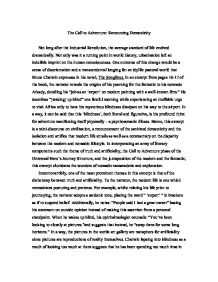 The Call to Adventure: Renouncing Domesticity

The Call to Adventure: Renouncing Domesticity Not long after the Industrial Revolution, the average standard of life evolved dramatically. Not only was it a turning point in world history, urbanization left an indelible imprint on the human consciousness. One outcome of this change would be a sense of disorientation and a transcendental longing for an idyllic pastoral world that Bruce Chatwin expresses in his novel, The Songlines. In an excerpt from pages 16-17 of the book, the narrator reveals the origins of his yearning for the fantastic to his comrade Arkady, detailing his "job as an 'expert' on modern painting with a well-known firm." He describes "[waking] up blind" one fateful morning while experiencing an ineffable urge to visit Africa only to have his mysterious blindness dissipate on his way to the airport. In a way, it can be said that this 'blindness', both literal and figurative, is his profound thirst for adventure manifesting itself physically - a psychosomatic illness. Hence, this excerpt is a mini-discourse on civilization, a renouncement of the sanitized domesticity and the isolation and artifice that modern life entails as well as a commentary on the disparity between the modern and nomadic lifestyle. ...read more.

In this setting, death is intertwined with the life's mundane routines, this stark honesty being characterized by the "vultures [that] flexed their wings along the roof tops." greeting him each morning as "[he] would watch the men at their daily grooming." In a way, the nomadic lifestyle is the epitome of honesty since they are devoid of respect for artifice, symbols of authority, or 'civilization' seeing as they "didn't give a damn: for the Pharaohs of Egypt or the British cavalry at Omdurman." Therefore, the honesty of the nomadic lifestyle is demonstrated by the use of vivid scenery as well as a lackadaisical attitude towards authority. Similarly, Chatwin chose Africa to visit because it was the site of human evolution, where the oldest human remains were uncovered1. This inexplicable urge to visit Africa may be interpreted as a need to rediscover his origins and assume an Edenic beatific existence, much like the pastoral lifestyle of the nomads. The fact that his eyes "had recovered by the time [he] reached the airport." is testament to the supernatural nature of his blindness, being the physical manifestation of his yearning for the fantastic. ...read more.

As well, the nomads "anointed each other's hair."- grooming being a bonding gesture that belies intimacy and tenderness. This warmth stands in stark contrast to Chatwin's deadpan account of his former life which is noticeably devoid of personal adjectives of any kind. For example, in enjoying a lucrative occupation as an art appraiser, one would be expected to feel mortified at losing one's eyesight. Chatwin however, observes with cold objective detachment: "One morning, I woke up blind." Ergo, through the use of divergent tones, Chatwin contrasts the honesty and warmth of the nomadic lifestyle with the sterility and artifice of the modern lifestyle. In tracing Chatwin's progression from a self-professed 'expert' on modern painting to a 'horizon-struck' wanderer and an advocate of the nomadic lifestyle, this excerpt explores the themes of truth and artifice, tradition and modernity, as well as the discrepancy between the modern and nomadic lifestyle. In conforming to the Call of Adventure phase of Joseph Campbell's Universal Hero Structure, Chatwin pays homage to the revered ancient myths of ages past as well as imbues his text with an element of the fantastic. Hence, in using psychosomatic blindness as the catalyst for change, Chatwin asserts that importance of journeying, exploration, and camaraderie. ...read more.