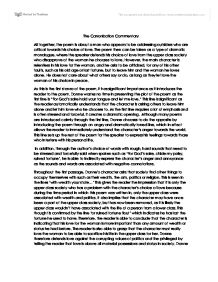 The Canonization Commentary All together, the poem is about a man who appears to be addressing outsiders who are critical towards his choice of love. The poem then can be taken as a type of dramatic monologue, where the speaker defends his choice of love from the upper class society who disapprove of the woman he chooses to love. However, the main character is relentless in his love for the woman, and he asks to be criticized, for any of his other faults, such as his old age or lost fortune, but to leave him and the woman he loves alone. He does not care about what others say or do, as long as they let love the woman of his choice in peace. As this is the first stanza of the poem, it has significant importance as it introduces the reader to the poem. Donne wastes no time in presenting the plot of the poem as the first line is "For God's sake hold your tongue and let me love." This line is significant as the reader automatically understands that the character is asking others to leave him alone and let him love who he chooses to. ...read more.

The line 'my five grey hairs' is Donne's way of indirectly expressing the character's older age. Donne incorporates a sense of irony between the first stanza and the rest of the poem with his religious references. Throughout the first stanza, there is a constant reference to money and politics made. However, Donne also includes the Catholic Church in this mix in the sixth line where he says 'Observe his Honor or His Grace' with 'his grace' referring to a Bishop. However, in the rest of the poem Donne has the character using words with religious connotations such as 'hymn, canonized, reverend and hermitage' when talking about love. This implies that the speaker believes that love is spiritual, while making a distinct separation between spirituality and the Catholic Church. The Catholic Church is incorporated with wealth, and politics and thus corruption, while spirituality by itself is something holier. The stanza is 9 lines long which is consistent throughout the entire poem, which divide it into five parts. Although each stanza is quite long, Donne is able to unify each stanza through his rhythmic pattern. Donne rhymes words at the beginning of the stanza with words at the end of the stanza, which creates unity throughout the stanza as all of his ideas are unified through his rhythmic structure. ...read more.

Thought is confirmed by the line 'or ruined fortune flout' which indicates he has lost the fortune he used to have. Therefore, reader is able to conclude that the character is indicating that his love for the woman is more important than any amount of wealth or status he had before. The reader is also able to grasp that the character must really love the woman to be able to sacrifice his life in the upper class for her. Donne therefore defends love against the corrupting values of politics and the privileged by telling the reader that love is above all material possessions and status in society. Donne incorporates metaphors throughout the first stanza to bring across his message to the reader. Instead of directly stating that society could preoccupy themselves with politics and money, he represents them through metaphors such as in line 'Or the King's real, or his stamped face.' The King's real is a metaphor for getting favors from the royal family, while 'stamped face' indicates money as the King's face is put on coins. The line 'my five grey hairs' is Donne's way of indirectly expressing the character's older age. ...read more.