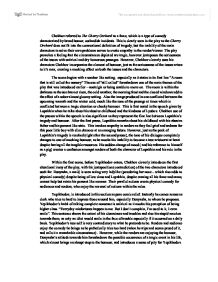 Chekhov referred to The Cherry Orchard as a farce, which is a type of comedy characterized by broad humor, outlandish incidents. This is clearly seen in the play as the Cherry Orchard does not fit into the conventional definition of tragedy, but the inability of the main characters to solve their own problems serves to evoke empathy in the reader/viewer. The play provokes a feeling that the circumstances depicted are tragic, however juxtaposes the seriousness of the issues with satirical and dry humorous passages. However, Chekhov cleverly uses his characters Chekhov incorporates the element of humour, just as the seriousness of the issues arises to it's max, creating a mocking effect on both the issues and the characters. The scene begins with a somber like setting, especially as it states in its first line "A room that is still called the nursery" The use of "still called" foreshadows one of the main themes of the play that was introduced earlier - nostalgia or being unable to move on. The room is within the darkness as the sun has not risen, the cold weather, the morning frost and the closed windows add to the effect of a sober almost gloomy setting. ...read more.

Yepikhodov, is introduced in this section as pure comic relief. Instantly he comes across as clerk who tries to hard to impress those around him, especially Dunyasha, to whom he proposes. Yepikhodov's habit of talking complete nonsense is satirical as it mocks his perception of being higher class. "Everyday misfortunes happen to me. But I don't complain, I'm used to it, I even smile". This sentence shows the extent of his clumsiness and troubles and also his stupid reaction towards them, as only an idiot would smile in the face of trouble especially if it occurred on a daily basis. Yepikhodov's true self is very contradictory to what he pretends to be. Readers and audience enjoy the comedy he brings as he pathetically tries too hard (when he trips and seems proud of it, and calls it a remarkable circumstance) . However, while the readers are enjoying the humour, Dunyasha's attitude towards him foreshadows the possible occurrence of a tragic event in his life, which almost brings an abrupt stop to the humour, and introduces a sense of pity for Yepikhodov. ...read more.

Varya's tears and caresses show the depth of the pain and sadness that surround the siblings, and their inability to help themselves. Though, there are yet again, instances of complete random humour that lessen the somberness of the tone. Firstly, when the discussion of their orchard being sold in August is taking place, Lopakhin sticks his head in and says "Mooo". The absurdity of the sentence provides instantaneous humour, immediately changing the tone of the play. Additionally the conversation between Dunyasha and Yasha, when he embraces her and calls her a cucumber also provides comic relief which lessens the full serious effect of the conversation to follow. Chekhov's play The Cherry Orchard (throughout this act) is a masterpiece in the way it combines tragedy and comedy into one dialogue. This play succeeded in telling a story while it shined in its most comic moments, and dulled in its tragic mourning. The play clearly exhibits both a comic perception as well as a tragic one. The comedy, although more directly comes from the characters themselves, would be half as noticeable without the tragic occurrences of the family and those surrounding them. Just as with comedy, the tragic moments would not seem as tragic without the comic outbursts of the characters and their repeated failing actions. ...read more.