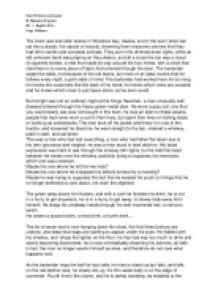 The clock was well after twelve in Woodrow bay, Alaska, and in the worn down bar sat the outcasts

﻿Sven EriksonsGymnasiet IB Diploma Program IB11 - English B HL Freja Williams The clock was well after twelve in Woodrow bay, Alaska, and in the worn down bar sat the outcasts, the rejects of society, drowning their lonesome sorrows that they had left in spirits and complete solitude. They sat in the dimmed down lights, while an old unknown band was playing on the jukebox, and all a cross the bar was a cloud of cigarette smoke, a mist that made its way around the foul minds, with a smell that clenched on to every piece of fabric that entered through the door. The bartender swept the table, not because of the old stains, but more of an ideal routine that he follows every night, a grim state of mind. ...read more.

This was a man who had lost everything, a man who had fallen flat down due to his own ignorance and neglect, he was a man stuck in total oblivion. His facial expression was hard to see through the smokey dim lights, but he held his head between his hands over the whiskey, painfully trying to suppress his memories, which one was uncertain. Maybe the one where he left his two kids? Maybe the one where he?d skipped his fathers funeral for a meeting? Maybe he was trying to suppress the fact that he wasted his youth on things that he no longer bothered to care about, not even the slightest. The green lamp above him flickers, and with a rush he finishes his drink, he is not in a hurry to get anywhere, he is in a hurry to get away, to slowly fade away from himself. ...read more.

As the bartender rings the bell for last calls, he tries to stand up but fails, and falls on the red-leather seat, he slowly sits up, his thin weak body is on the edge of surrender. Fourth time?s the charm, and he is barley standing, he wobbles to the door, but walks by the bartender and takes his old, worn out hands, and stuffs them full of cash and closes his fingers around it, he tells the bartender that he is better of with it, because he himself is a dead man walking. He leans on the door so that it opens. The bartender never laid eyes on the drunken man ever again, he never expected to either, especially considering the state of mind that he left, the bartender in all honestly never though anyone else would lay eyes on the man again, at least not alive. ...read more.