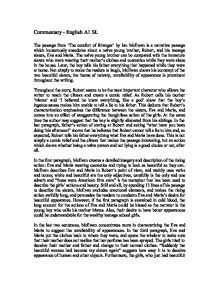 Commentary - English A1 SL The passage from 'The comfort of Stranger' by Ian McEwan is a narrative passage which humorously anecdotes about a na�ve young brother, Robert, and his teenage sisters, Eva and Maria. The na�ve young brother can be compared with the immature sisters who were wearing their mother's clothes and cosmetics while they were alone in the house. Later, the boy tells his father everything that happened while they were at home. Not simply to make the readers to laugh, McEwan shows his contempt of the two beautiful sisters, the theme of naivety, unreliability of appearance is prominent throughout the writing. Throughout the story, Robert seems to be the most important character who allows the writer to reach the climax and create a comic relief. As Robert calls his mother 'Mama' and 'I believed he knew everything, like a god' show that the boy's ingenuousness makes him unable to tell a lie to his father. ...read more.

McEvan describes Eva and Maria in Robert's point of view, and mainly uses verbs and nouns; white and beautiful are the only adjectives, carefully is the only and one adverb and "these were American firm stars" is the metaphor that has been used to describe the girls' actions and beauty. Still and all, by spending 13 lines of his passage to describe the sisters, McEvan excludes emotional elements, and makes the rising action awfully long, and persuades the readers to condemn Eva and Maria's desire for beautiful appearance. However, if the first paragraph is examined in cold blood, the long account for the actions of Eva and Maria could be biased as the narrator is the young boy who calls his mother Mama. Also, their desire to have better appearances could be understandable for the wealthy teenage school girls. ...read more.

Compared with the first paragraph, the last two paragraphs are relatively shorter in length. The second paragraph is the shortest one that illustrates Eva and Maria putting the clothes, powder and lipstick to where they were at the beginning. In the third paragraph, the plot unfolds rapidly, and creates suspense when Robert reveals what had happened in the afternoon. Thus, the author is suggesting how fast and easy it is to deceive the in visual way and at the same time, how the truth can never be deceived completely. Most of the readers would find this passage hilarious, and at the same time, they might feel not so sympathetic toward Eva and Maria. However, most of the readers probably have experienced a similar situation which Robert or Eva and Maria are in. Therefore, the author could be telling the readers to have a flashback of a situation where they were Robert or Eva and Maria, and consider if they were trying to lie and deceive other person. ?? ?? ?? ?? ...read more.