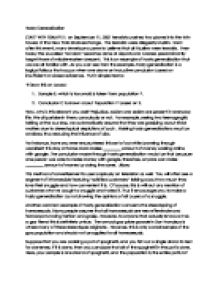 The Dangers of Hasty Generalizations Speech.

Hasty Generalization START WITH EXAMPLE: on September 11, 2001 terrorists crashed two planes into the twin towers of the New York stock exchange. The terrorists were allegedly Muslim. Soon after this event, many Americans came to believe that all Muslims were terrorists. Even today the so-called "random" searches done at airports and borders predominantly target those of middle-eastern descent. This is an example of hasty generalization that we are all familiar with. As you can see from the example, hasty generalization is a logical fallacy that occurs when one draws an inductive conclusion based on insufficient or biased evidence. Put in simpler terms: -->Draw this on board: 1. ...read more.

/kiara This method of advertisement is used copiously on television as well. You will often see a segment of infomercials featuring "satisfied customers" talking about how much they love their snuggie and how convenient it is. Of course, this is without any mention of customers who've bought a snuggie and hated it. Thus it encourages you to make a hasty generalization by not showing the opinions of all buyers of a snuggie. Another common example of hasty generalization concerns the stereotyping of homosexuals. Many people assume that all homosexuals are very effeminate and flamboyant, loving fashion and gossip. However, to anyone that actually knows or has a gay friend this is definitely untrue. ...read more.

However when we are dealing with a population that is more variable than a pot of spaghetti, such as humans, we need to be more aware of how large a sample is needed to correctly represent the variability. Here is a video of an example of hasty generalization: *play video* This bit of dialogue between two men really highlights how easy it is to make a hasty generalization. In criticizing a feminist making a poor judgment, they end up judging all feminists in the same way she did all men. To sum up what we've said here, we all seek to classify things we experience in order to help make decisions about similar items we meet in the future. This generalization is a form of oversimplification and always results in some distortion. If we generalize too soon, we may classify things incorrectly. ...read more.