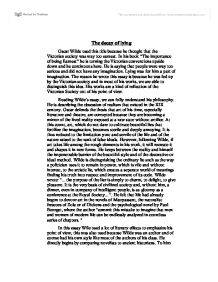 The decay of lying

The decay of lying Oscar Wilde used this title because he thought that the Victorian society was way too earnest. In his book "The importance of being Earnest" he is turning the Victorian conventions upside down and he continuous here. He is saying that people were way too serious and did not have any imagination. Lying was for him a part of imagination. The reason he wrote this essay is because he was fed up by the Victorian society and in most of his works, we are able to distinguish this idea. His works are a kind of reflection of the Victorian Society out of his point of view. Reading Wilde's essay, we can fully understand his philosophy. He is describing the obsession of realism that existed in the XIX century. ...read more.

Wilde wrote: "... the purpose of the liar is simply to charm, to delight, to give pleasure. It is the very basis of civilized society and, without him, a dinner, even in company of intelligent people, is as gloomy as a conference at the Royal Society... ". He felt that life had already begun to devour art in the novels of Maupassant, the naturalist frescoes of Zola or of Dickens and the psychological novel by Paul Bourget, where the author "commit this mistake to imagine that men and women of modern life can be endlessly analyzed in countless series of chapters. " In this essay Wile used a lot of literary effects to emphasize his point of view, this was also used because Wilde was an author and of course had his own style like most of the authors of his class. ...read more.

He also uses an enriched vocabulary with words such as: "meditative moments, disinterested, ..." We can also find some more usual techniques like alliteration which is used for example in: "As one knows the poet by his fine music, so one can recognise the liar by his rich rhythmic utterance,..." The use of a pointed antithesis is to be found in the first paragraph. In its whole, this extract from 'The decay of lying', gives us a clear image of the style of Oscar Wilde. Oscar Wilde lived in a society that did not understand him, therefore he developed a rejection of the standards of the Victorian society. This affected greatly his works. From my own experience I can say that Wilde suffered to live in the XIX, but this gave him his personal touch. Thanks to his cleverness, he was able to write unconventional books and still keep success. ...read more.