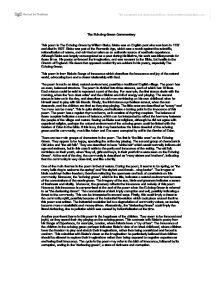 The Echoing Green Commentary This poem is The Echoing Green by William Blake. Blake was an English poet who was born in 1757 and died in 1827. Blake was part of the Romantic Age, which was a revolt against the scientific, rationalization of nature, and admired emotion as an authentic source of aesthetic experience. Although Blake was largely unrecognized as a poet during his lifetime, his work was idiosyncratic for those times. His poetry embraced the imagination, and was reverent to the Bible, but hostile to the Church of England. His views that opposed conformity are evident in his poetry, especially The Echoing Green. This poem is from Blake's Songs of Innocence which describes the innocence and joy of the natural world, advocating love and a closer relationship with God. The poem is set in an ideal, natural environment, possibly a traditional English village. The poem has an even, balanced structure. The poem is divided into three stanzas, each of which has 10 lines. ...read more.

The old folk reminisce on their youth, when "they all, girls and boys, in their youth time were seen on the Echoing Green". At the end of the day, the community is described as "many sisters and brothers", indicating that the community is very close-knit, and like a family. One of the main themes in the poem is that of nature. During the poem, it seems to be spring, as "the merry bells ring to welcome the spring" and "the skylark and thrush... sing louder". The images of birds could symbolise freedom, therefore reflecting the openness and lack of constraints on this community. Moreover, the "echoing green", which is the title, indicates a natural environment because of the connotations of the words green. The imagery of the sun, birds and greenery indicates a sense of freshness and vitality. Moreover, the greenery reflects the innocence and naivety of this poem. However, this innocence is compromised at the end of the poem when the Echoing Green is referred to as "the darkening Green". ...read more.

Blake uses a variety of literary devices in his poem The Echoing Green. Positive sound imagery, such as "merry bells ring", "the birds... sing louder" and "the bell's cheerful sound" appeals to the reader's senses to create a vivid and cheerful image of the setting. Similes are also used, such as "many sisters and brothers, like birds in their nest". The use of this simile indicates a sense of harmony with nature by equating the community to birds. It also indicates a sense of warmth, protection and unity in the community, which makes it seem even more innocent and comforting. Another literary device used is repetition. The words "on the echoing green are repeated in lines 10 and 20, both of which are the last lines of their respective stanzas. This re-emphasises the harmony of the community with nature, which reinstates the idyllic image. However, in line 30, this line is twisted slightly, to indicate that perhaps the community is not as idyllic as it had previously seemed. Blake's poem discusses the idealism of a utopian society where childhood is valued, but the somewhat sinister end indicates that perhaps this will be corrupted, which reflects the reality of society during Blake's time. ...read more.