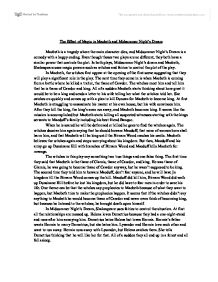 The Effect of Magic in MacBeth and Midsummers Night Dream

The Effect of Magic in Macbeth and Midsummer Night's Dream Macbeth is a tragedy where the main character dies, and Midsummer Night's Dream is a comedy with a happy ending. Even though theses two plays are so different, they both have a similar power that controls the plot. In both plays, Midsummer Night's dream and Macbeth, Shakespeare uses magic powers such as witches and fairies to control the plot of the play. In Macbeth, the witches first appear at the opening of the first scene suggesting that they will play a significant role in the play. The next time they come in is when Macbeth is coming from a battle where he killed a traitor, the thane of Cawdor. The witches meet him and tell him that he is thane of Cawdor and king. All of a sudden Macbeth starts thinking about how great it would be to be a king and sends a letter to his wife telling her what the witches told her. ...read more.

The witches in this play say something two true things and one false thing. The first time they said that Macbeth is the thane of Glamis, thane of Cawdor, and king. He was thane of Glamis, he was going to become thane of Cawdor anyway, but he wasn't supposed to be king. The second time they told him to beware Macduff, don't fear anyone, and he will have jis kingdom till the Birnam Wood comes up the hill. Macduff did kill him, Birnam Wood did walk up Dunsinane Hill before he lost his kingdom, but he did have to fear men in order to save his life. One theme can be that the witches say prophecies to Macbeth because of what they want to happen, but Macbeth tries to make the prophecies happen. It seems that if the witches didn't say anything to Macbeth he would become thane of Cawdor and never even think of becoming king, but because he listened to the witches, he brought death upon himself. ...read more.

When they all wake up again, Lysander falls back in love with Hermia, and Demetrius still loves Helena and the play ends with them getting married and living happily ever after. In this play the fairies control the whole situation without any consent from the humans. All that happens is their fault. They even play a trick on the queen fairy where she sleeps with an ass-head. A possible theme for this play is that there is nothing you can do to intervene with the magical powers. In conclusion, both Macbeth and Midsummer Night's Dream have the plot controlled by the magical powers. The difference is that in Macbeth, the witches just give suggestion and the people have a choice to act upon it or not. In Midsummer Night's Dream the fairies give no choice to the humans but do whatever they think is right. It is interesting how in both plays the magical powers have something to do with the main characters twice. The first they kind of mess up and the second they try to put things back into position. ...read more.