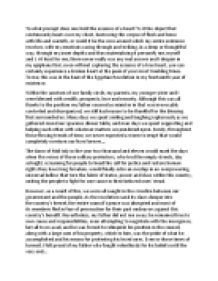 The Effects of the Egyptian revolution on my family and me.

﻿To what precept does one hold the essence of a heart? Is it the object that continuously beats over my chest, bestowing this corpse of flesh and bone with life and warmth, or could it be the core around which my entire existence revolves, with my emotions racing through and striking, in a deep or thoughtful way, through my inner depths and thus materializing it personify me, myself and I. At least for me, there never really was any real answer and I despair in my epiphany that, even without capturing the essence of a true heart, you can certainly experience a broken heart at the peak of your most troubling times. To me, this was in the heat of the Egyptian Revolution in my fourteenth year of existence. Within the sanctum of our family circle, my parents, my younger sister and I were blessed with wealth, prospects, love and security. ...read more.

As the revolution sank its claws deeper into the country?s kernel, the entire council?s peace was disrupted and most of its members fled in fear of persecution for their past endeavors against this country?s benefit. Nevertheless, my father did not run away: he remained true to own cause and responsibilities, even attempting to negotiate with the insurgence, but all to no avail, and he was forced to relinquish his position in the council, along with a large sum of his property, which to him, was the pride of what he accomplished and his means for protecting his loved ones. Even in those times of turmoil, I felt proud of my father who fought relentlessly for his beliefs until the very end?. On the other hand, my life was plunged into total chaos because of this change; my classmates in school suddenly turned against me: calling me a ?leech? who had been living off the hard earned money that their forefathers entrusted to them. ...read more.

Yet why wouldn?t anybody come to my aid; why wouldn?t my rights be heeded; and why was I betrayed by those closest to my heart? Was it a sin to be born; and were the bonds to which this single most life was connected so frail, that the slightest shake would quiver them into shattering? Questions on top of which questions bewildered , piling up inside me, until the thought of existence became unbearable; never to find the voice to be communicated and forever suppressed by encompassing tides of fear and vulnerability. From then on, my life underwent a dramatic change from the twists and turns of our unfortunate circumstances. I decided I would never open my heart again to any creature alive. I decided that this heart would nevermore tighten or bleed for the sake of another human being. And it was decided, by hands unknown to me, that only the burden of responsibility and the tragedy of loss would resurrect this heart from its casket and so allow it to throb once for its fellow creatures. ...read more.