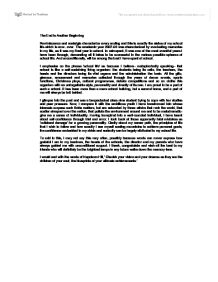 The end is another beginning

The End is Another Beginning Reminiscence and nostalgia characterize every ending and this is exactly the status of my school life-which is now...over. The academic year 2007-08 was characterized by everlasting memories in my life, as it was my final year in school. In retrospect, it was one of the most eventful years I have been through, demanding all it takes to be successful in the various possible spheres of school life. And unconditionally, will be among the best I have spent at school. I emphasise on the phrase 'school life' as because I believe- metaphorically speaking- that school is like a self-sustaining living organism: the students being its cells, the teachers, the heads and the directors being its vital organs and the administration the brain. All the glitz, glamour, amusement and memories collected through the years of dance events, sports functions, Christmas plays, cultural programmes, debate competitions and so on clothe this organism with an unforgettable style, personality and vivacity of its own. I am proud to be a part of such a school. It has been more than a mere school building, but a second home, and a part of me will always be left behind. I glimpse into the past and see a bespectacled class nine student trying to cope with her studies and peer pressure. ...read more.

This seems to be a little better, doesn't it? As I had written it down, there would be no problem if I had lost it from the mind folder. So I started making the main body, "As the front half of it glided through the ocean, we landed safely on an island inside with its back half. None of the passengers got scared hoping that they were going to be rescued as soon as possible. But three whole days passed, no one had come. Some people got sick while others were starving. No one had enough energy to create any sort of a noise or chaos. Everyone was lying down while I noticed a hill pretty far away from us. I knew that we could find something to eat if we had managed to reach it. We walked for a few metres and sat down to rest. Suddenly a big tiger appeared and chased us to the hill. Then, no one couldn't really walk any further." So, how is it going? Pretty good, ha? But the conclusion was still left. At least I didn't forget to write it. Here it goes, "As I was trailing behind everyone tiredly, the tiger caught me first. It was just about to eat me when my tummy rumbled. I was so hungry that I ate the tiger instead of it eating me." I think that it is not that bad, is it? ...read more.

Tears of joy had already started welling up in my eyes. On that smoky night nothing seemed clear. I wasn't even able to see the bulky figure ahead. I ran into Matron... Fear paralyzed my senses and the thought of the consequences I was going to meet made my body numb. Yet for some reason I kept on running. AAAAAAaaaa!!I woke up. Sweating and panting, realizing that I was still in my well decorated bedroom. I was terrified and wondered that: Had I just visited somebody's mind? What a peculiar dream? Or was it a serious case of re-incarnation? No, never, that only happens in stories. I was glad that I had parents, a beautiful home and friends in dozens. Just to assure myself that I had not stepped into the twentieth century, I tiptoed to my parent's room and saw them sleeping soundly. I was in India, not Germany! Huh! What a relief. To gratify that questioning sensation in my heart I even went to my irksome sister's room. So what if we bickered all the while and she constantly teased me, she was actually very loving and fond of me. When I saw her sleeping there an EVIL thought occurred to me. I hadn't used my paints for a long time. Alas! I was back to my mischievous self . . . Admiring me handiwork, I went and prepared to go back to bed. After all I had school the next day and I needed to sleep. ...read more.