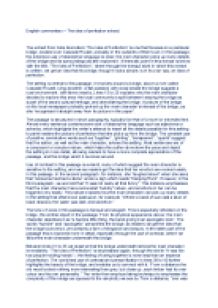 The extract from Kate Grenvilles The Idea of Perfection is one that focuses on a particular bridge, located over Cascade Rivulet

﻿English commentary ? The idea of perfection extract The extract from Kate Grenville?s ?The Idea of Perfection? is one that focuses on a particular bridge, located over Cascade Rivulet, probably in the outskirts of their town. In this passage, the extensive use of descriptive language is clear; the main character picks up many details of the bridge and its surroundings as she explores it. A thematic point in this extract is linked with the title, ?The Idea of Perfection?, where through the tranquil style in which this extract is written, we get an idea that his bridge, though it looks simple, is in its own way, an idea of perfection. The setting is central to this passage, it revolves around a bridge, above a river called Cascade Rivulet, lying downhill. A flat paddock with cows beside the bridge suggest a rural environment, with farms nearby, Lines 15 to 20 explains why the main character decided to explore this area: the local community is split between keeping the bridge as a part of the area?s cultural heritage, and demolishing the bridge. ...read more.

In the second paragraph, for instance, she ?laughed aloud? when she sees that ?someone had tied a stone? under a sign which reads ?Hanging Rock?. However, in the third paragraph, we are told that ?It was not really all that funny?. This instance emphasises that the main character has a somewhat ?bubbly? nature, and emotions in her can be triggered very easily. This nature explains how the main character can pick up many details in the setting that others look past upon, for example; ?Where a band of sun cast a slice of black shadow, the water was dark and secretive.? The tone of voice in this passage is tranquil and elegant. This is especially reflected on the bridge, the central object in the passage. From its physical appearance above: the main character describes it as ?a humble little thing, the bend giving it an apologetic look?. The words ?humble? and ?apologetic? personifies the bridge; as readers we get the idea that the bridge looks timid, yet contains a form of elegance and beauty. ...read more.

In lines 43-44, the writer states that the bridge was ?all coarse and clumsy?, but ?the shapes fitted together in a satisfying way?. The main character then begins to attempt drawing the bridge, merely focusing on the details of the way in which the bridge is structured. Through this action the main character portrays the complexity of the bridge, and how complicated something so simple can be; ?It looked so simple as to be not worth a second glance, but drawing it showed how complicated it really wad? Through the author?s appreciation of the bridge in this extract, we as readers follow suit and explore the bridge in this more appreciative manner. I believe the writer conveys a message of appreciation in this passage: that in order to fully appreciate something, we should view things in different ways and to the fullest detail. The author sums up the bridge well; ?simple squares and rectangles, simple lights and darks, arranged in a way that was not as simple as it seemed?. I believe this is the same for most things; they are not as simple as they look, and everything has their own essence of perfection, just like this bridge. ...read more.