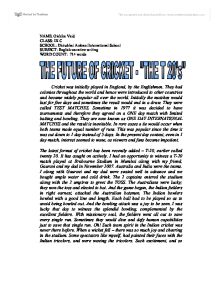 NAME: Oishika Vaid CLASS: IX C SCHOOL: Dhirubhai Ambani International School SUBJECT: English narrative writing WORD COUNT: 714 words Cricket was initially played in England, by the Englishmen. They had colonies throughout the world and hence were introduced to other countries and became widely popular all over the world. Initially the matches would last for five days and sometimes the result would end in a draw. They were called TEST MATCHES. Sometime in 1977 it was decided to have tournaments and therefore they agreed on a ONE day match with limited batting and bowling. They are now known as ONE DAY INTERNATIONAL MATCHES and the result is inevitable. In rare cases a tie would occur when both teams made equal number of runs. This was popular since the time it was cut down to 1 day instead of 5 days. ...read more.

The Indian bowlers bowled with a good line and length. Each ball had to be played so as to avoid being bowled out. And the bowling attack was a joy to be seen. I was lucky that day to witness the splendid bowling, complemented by the excellent fielders. With missionary zeal, the fielders went all out to save every single run. Sometimes they would dive and defy human capabilities just to save that single run. Oh! Such team spirit in the Indian cricket was never there before. When a wicket fell - there was so much joy and cheering in the stadium. Some spectators like myself, had painted their faces with the Indian tricolors, and were waving the tricolors. Such excitement, and so much euphoria. ...read more.

Within the next 5 balls 6 more runs were added making a total of 10 runs in 1 over. Gambhir hit the second ball of the second over for a 4. The crowd was in delirium. And a few balls later, Sehwag was caught attempting to hit a sixer. There was shock and silence in the stadium, for the star opening batsman. However, we cheered the next batsman in. The scoring rate had slowed down but well within control. Gambhir batted sensibly and kept the run rate going. Then the public started screaming in unision -WE WANT SIX, WE WANT SIX. And soon the next ball was hit hard by Gambhir and the ball tossed for a six. And the crowd was ecstatic with joy. And the run rate was then comfortable. Soon India's victory was announced... "India had won the match!" HARD WORDS: 1) Zeal - full of enthusiasm 2) Euphoria - exhilaration 3) Delirium - frenzied excitement 4) Ecstatic - emotional excitement ...read more.