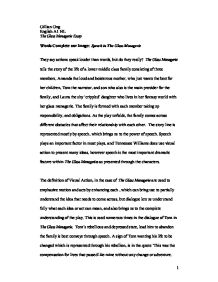 The Glass Menagerie: Is Visual Action as important as speech?

Gillian Ong English A1 HL The Glass Menagerie Essay Words Complete our Image: Speech in The Glass Menagerie They say actions speak louder than words, but do they really? The Glass Menagerie tells the story of the life of a lower-middle class family consisting of three members, Amanda the loud and boisterous mother, who just wants the best for her children, Tom the narrator, and son who also is the main provider for the family, and Laura the shy 'crippled' daughter who lives in her fantasy world with her glass menagerie. The family is formed with each member taking up responsibility, and obligations. As the play unfolds, the family comes across different obstacles that affect their relationship with each other. The story line is represented mostly by speech, which brings us to the power of speech. Speech plays an important factor in most plays, and Tennessee Williams does use visual action to present many ideas, however speech is the most important dramatic feature within The Glass Menageries as presented through the characters. The definition of Visual Action, in the case of The Glass Menagerie are used to emphasize motion and acts by enhancing each , which can bring use to partially understand the idea that needs to come across, ...read more.

Tom's constant unhappiness has caused complications in the family when he leaves them without electricity Laura is the daughter of Amanda, and Tom's sister, her timid and shy attitude is shown through dialogue and is best represented in the following quotes. 'There was a Jim O'Connor we both knew in high school - If that is the one that Tom is bringing to dinner - you'll have to excuse me, I won't come to the table.' (Page 277) Through this quote, we see her backing away from the idea of meeting an old crush, presenting her scared attitude towards something new that could be part of her life. Laura displays her fearful approach to the outside world and it has already been shown, 'I went in the art museums ... that big glass-house where they raise the tropical flowers' (Page 244) and then directly presented her fearfulness towards being with other people that are not her family in 'I couldn't face it.' (Page 245) Laura's shyness and timidity can also be seen by the words she uses. These quotes enhance the fact that dialogue and speech better convey the concept, act, or feelings of a character in The Glass Menagerie. ...read more.

(Page 275) This is significant because personally I think it has pushed Laura to try to make use of herself, instead of keeping uptight most of the time. Amanda presents her care for her children through the device of speech, and this helps us get a fuller understanding of how she presents herself and what she is thinking. Amanda's unpleasant habit of speaking in a tone that implies her care for her children can be insensitive and callous, but gets the point across and overall we manage to comprehend the fact that she just wants the best for her children. The characters in The Glass Menagerie are represented vividly through speech emphasizing their character traits. The tool of speech in The Glass Menagerie has been expressed by Tennessee Williams in the form of his characters Laura, Tom and Amanda, and is the most significant factor used. Overall looking at speech, it seems speech is expressed in many different forms within The Glass Menagerie and we can take away from this that it is not always true that Actions Speak Louder than Words, as this tool has influenced the understanding of the play, and made it clearer than if the play was just an Action play with no speech. 1 ...read more.