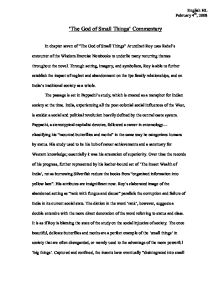 The God of Small Things Commentary.

'The God of Small Things' Commentary In chapter seven of "The God of Small Things" Arundhati Roy uses Rahel's encounter of the Wisdom Exercise Notebooks to underlie many recurring themes throughout the novel. Through setting, imagery, and symbolism, Roy is able to further establish the impact of neglect and abandonment on the Ipe family relationships, and on India's traditional society as a whole. The passage is set in Pappachi's study, which is created as a metaphor for Indian society at the time. India, experiencing all the post-colonial social influences of the West, is amidst a social and political revolution heavily defined by the central caste system. Pappachi, a stereotypical capitalist devotee, followed a career in entomology-classifying his "mounted butterflies and moths" in the same way he categorizes humans by status. His study used to be his hub of career achievements and a sanctuary for Western knowledge; essentially it was his attestation of superiority. Over time the records of his progress, further represented by his leather-bound set of 'The Insect Wealth of India', rot as burrowing Silverfish reduce the books from "organized information into yellow lace". ...read more.

The "buffed and beautiful" procession is given similar qualities to the butterflies and moths, but this time the ants are recognized individually and equally-representing the powerful upcoming communist parade of India's lower class. The way in which Rahel interacts with the study describes her role in her family, and in society. Rahel's "clear footprints" against "the dust of the floor" contrast her vivid presence with her grandfather's forgotten past. Her highlighted path leading from "the door to the table (dragged to the bookshelf) to the stool (dragged to the table and lifted on to it)" marks her organized determination in recovering her own past. Her initial lack of "size and shape" in her life shows how her lack of participation in India's social battle allows her to maintain her a clean, carefree outlook on life. However, when it becomes clear that she is searching for "something", the "half-moons" under her eyes are noticed and the "team of trolls" is waiting "on her horizon". ...read more.

Estha is the embodiment of the idea of 'death of dreams'. Since his childhood, his visions have been "lucid" but he has lacked control over his life in the same way his handwriting showed signs of "struggle for control over the errant, self-willed pencil". Life has objectified him and his once inimitable relationship with Rahel, treating the twins as "library books"-stories to simply be "borrowed and returned". He is angry at life for abandoning him, for straying from its expected course, and most of all for not letting him go-for keeping him pinned down like the empty spaces of the once beautiful butterflies and moths. The passage explores many of the prominent themes evaluating India's social society throughout 'The God of Small Things'. On a more internal note, it further establishes the complex relationship of Estha and Rahel as they uncover the past and face its inevitable impact on the future. Although stolen and hidden for many years, the past, as Rahel realizes, is "still here". It always will be, reminding them of the love and life they had, of the mistakes and dreams they lost, and of the challenges they still face. Word count: 1065 ...read more.