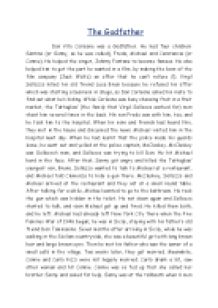 ﻿The Godfather Don Vito Corleone was a Godfather. He had four children: Santino (or Sonny, as he was called), Fredo, Michael and Constanzia (or Connie). He helped the singer, Johnny Fontane to become famous. He also helped him to get the part he wanted in a film, by making the boss of the film company (Jack Woltz) an offer that he can?t refuse (!). Virgil Sollozzo killed his old friend Luca Brasi because he refused his offer which was starting a business in drugs, as Don Corleone asked his mate to find out what he?s hiding. While Corleone was busy choosing fruit in a fruit market, the Tattaglias? (the family that Virgil Sollozzo worked for) ...read more.

He hit Michael hard in the face. After that, Sonny got angry and killed the Tattaglias? youngest son, Bruno. Sollozzo wanted to talk to Michael at a restaurant, and Michael told Clemenza to hide a gun there. McCluskey, Sollozzo and Michael arrived at the restaurant and they sat at a small round table. After talking for a while, Michael wanted to go to the bathroom. He took the gun which was hidden in the toilet. He sat down again and Sollozzo started to talk, and soon Michael got up and fired. He killed them both, and he left. Michael had already left New York City there when the Five Families War of 1946 began; he was in Sicily, staying with his father?s old friend Don Tommasino. ...read more.

Later that night, when Vito Corleone learnt that his son was dead, he decided to stop that war. Unfortunately, Apolonia (Michael?s wife) was killed by a bomb in the car which someone intended for Michael. At that moment, the meeting between the heads of the five New York families was on session, and it ended happily. After that, Michael returned and found her old girlfriend, Kay and they got married. Don Vito Corleone died a natural death. Then Michael found out that Tessio was a traitor. Soon, on the day Mike stood as godfather to Connie?s child, his men killed all of his enemies. They found out that Carlo Rizzi was a traitor too, so Clemenza killed him after the bodyguards had killed Tessio. The Corleones were now the strongest family in New York, and Michael was the new Godfather... ...read more.