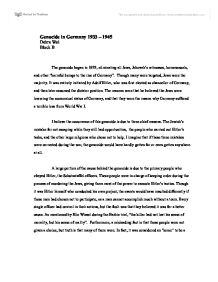 Genocide in Germany 1933 - 1945 Debra Wei Block B The genocide began in 1933, eliminating all Jews, Jehovah's witnesses, homosexuals, and other "harmful beings to the rise of Germany". Though many were targeted, Jews were the majority. It was entirely initiated by Adolf Hitler, who was first elected as chancellor of Germany, and then later assumed the dictator position. The reasons were that he believed the Jews were lowering the economical status of Germany, and that they were the reason why Germany suffered a terrible loss from World War I. I believe the occurrence of this genocide is due to three chief reasons. The Jewish's mistake for not escaping while they still had opportunities, the people who carried out Hitler's tasks, and the other large religions who chose not to help. I imagine that if these three mistakes were corrected during the war, the genocide would have hardly gotten far or even gotten anywhere at all. ...read more.

In fact, it was considered an 'honor' to be a Nazi, as being one, you were known as a pure German. This being the idea, many people were eager to participate as officers. The Jews who did not escape while there were opportunities are also to blame for the genocide against them. "When Hitler wrote it, no one could tell whether his plans and fantasies would ever be transformed into reality", Omer Bartov wrote in defense to the Jews. Though it is true that the genocide happened in gradual stages, carefully not alerting the victims, the turning of events and the new 'talk' hinted the future heavily. It was not that the Jews could not take the hint, they just were not able to accept it. Despite Hitler's cruel mind, he did allow apparent chances for the victims to escape Europe. ...read more.

While it is right to ensure the safety of your own religion first and foremost, isn't 'to help others whenever you can' what they teach people at church everyday? The Catholic church certainly could, as they were perfectly unharmed. In fear to speak out, they committed to hypocrisy, during the time they were needed the most. The church could not have done much physically, but by speaking out, maybe someone the millions of believers the Catholic church leads, could have gained the confidence to assist those victims. In my opinion, it was up to these three factors to prevent the genocide from taking place. I do not believe that it is too late to say so now, as many would say, history repeats itself. When it does, hopefully our world will overcome it with more improvement, by learning from our past mistakes. By stating the three mistakes clearly, I imagine that we will deal with the future conflicts better prepared. ...read more.