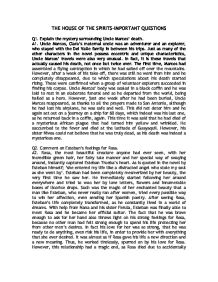 The House Of the Spirits by Isabel Allende

THE HOUSE OF THE SPIRITS-IMPORTANT QUESTIONS Q1. Explain the mystery surrounding Uncle Marcos' death. A1. Uncle Marcos, Clara's maternal uncle was an adventurer and an explorer, who stayed with the Del Valle family in between his trips. Just as many of the other characters in the novel possess eccentric and unique characteristics, Uncle Marcos' travels were also very unusual. In fact, it is these travels that actually caused his death, not once but twice over. The first time, Marcos had assembled a flying contraption in which he had sailed off over the mountains. However, after a week of his take-off, there was still no word from him and he completely disappeared, due to which speculations about his death started rising. These were confirmed when a group of volunteer explorers succeeded in finding his corpse. Uncle Marcos' body was sealed in a black coffin and he was laid to rest in an elaborate funeral and so he departed from the world, being hailed as a hero. However, just one week after he had been buried, Uncle Marcos reappeared, as thanks to all the prayers made to San Antonio, although he had lost his airplane, he was safe and well. ...read more.

He regretted every moment he spent away from her and this incurable despair that she had left him with was indeed going to change his life forever. Thus, it was a very tragic end to a beautiful relationship that could have been, and to overcome all the grief that Rosa's death had caused him, he left his past behind him and departed for Tres Marias, where he hoped to rebuild his future, and attempt to live a life without his beloved. Clara, Rosa's sister, had been there all the while when her sister died, during her autopsy and at the time of her funeral. She went through all of this at a very young age and so it had a deep impact on her. Clara had used her clairvoyance to predict Rosa's death and hence, she was consumed by guilt, because she felt that her sister had passed away because she had foreseen the event of her death. She firmly believed that her magical powers had indeed caused her sister's death. She felt extremely lonely and all that she wanted was to be with her sister, Rosa. Moreover, Clara had witnessed the spectacle of Rosa's autopsy being carried out in the kitchen. ...read more.

However, more than helping her, his very presence induced a state of terror in her, as she ran away and hid as soon as she saw him. The family then tried other means to get her to speak, but all were useless. The Romanian Rostipov was also called to examine her, but the only conclusion he could draw was that the child did not speak, because she did not have a desire to do so. Thereby, Nana, Clara's nanny tried several tricks to frighten her and thus, get her to speak and Dr.Cuevas even suggested the idea of old baths and electric shocks for her treatment, which he had brought from Europe. Her mother tried narrating stories to her, but none of these worked, and for nine long years, Clara Del Valle remained in the same state, silent and mute, in her own world. When she got married to Esteban, even though she started speaking, she still had those phases during her marriage, when she would suddenly go mute without an apparent reason. It is then when Esteban actually realized that silence was his wife's last refuge and not a mental illness, as Dr.Cuevas had suggested it was. ...read more.