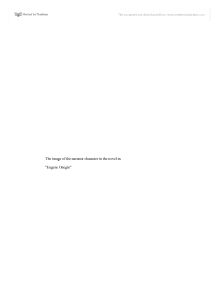 The image of the narrator character in the novel in &quot;Eugene Onegin&quot;

The image of the narrator character in the novel in "Eugene Onegin" The novel "Eugene Onegin" is the result of creative maturity of Pushkin, and it is the richest content and its most popular product. The text reveals to the reader a broad picture of Russian reality since the beginning of the XIX century, populated by full-blooded human characters.Among them stands a particular presence - a story. Along with the main characters stand out and his personality, hidden behind the image of the hero story. In effect, he said Romanov in confessional self-form, dialogical "you" and "we"-form and tretolichnoto "he" in which we find vsevizhdashtiya storyteller. Thus it makes the image avtoharakteristika their relationship and expressed the attitude towards the characters and events while making an objective look at the work shown in the world. Hero storyteller commented saprezhivyava, deny or approve - he was an active figure in the novel reveals its strengths and weaknesses, has clarified moral values established notions of good and evil in life. Before us stood a sociable interlocutor who is looking for reader confidence and he trusts him. At the beginning of the novel the narrator begins to build its image, conspiracy in the first person singular and addressing the "you" - adersat. ...read more.

The hero declares his belonging to a fake world, but also puts a sharp border between what was and what is the present. Actions submitted in the past perfect time were: "I lost my balls in your mind," life without consciousness rasp. They are defined as events of youth, which is lush, filled with joy and splendor, but with "crowds" - lacking a deep thoughts and feelings live. From your current position changed person narrator can now be self-critical to their former appearance with his usual levity, women's addiction to "step" longing for kisses, fast ignition and quench love.Now, in the present, he said, although it belongs to high society, distanced itself from him because he has the ability to become a puppet of human personality to its deletion. It supports the most important in life - love, family, friendships are forged. Requested by spiritual kinship between Onegin and the narrator is drawn image of the Romantic hero type - the work bears many of the features of Romanticism. Identified is the distance from the surrounding reality, the feeling of neuyutnost, poshlost disgust of his reign and hypocritical morality. ...read more.

Therefore, when speaking to Moscow, for its dignity and beauty of the poet came to worship. It is costly to his heart, warm his soul and carry it in yourself. Relationship with the native becomes a mainstay of the people to withstand the tests of life. In the constructed image of the hero story is not difficult to find avtobiografizam. The novel was written for more than 7 years and what happened in this long period of Pushkin's life reflected in the pages of the book. In the present text face - love the place, whose characteristic is metaphorical in calm silence bloomed. Is it near the Neva and the city in which the poet felt rejected and unwanted, and mentions censorship - tegneshtata barrier to freedom of the creative act, and exiled to the south, which are the cause of verse against the king's autocracy and serfdom law. The novel "Eugene Onegin" Pushkin, whom A. Block coincidence called "son of harmony, creating the image of the character narrator to express his ideas through his human life, true eternal values that give meaning to existence. Denying ills of society in which he lives, affirming and spiritually pure person with high demands on themselves and others, this character becomes a moral watchdog of his time. ?? ?? ?? ?? 2 1441 - 023 ???????????? ...read more.