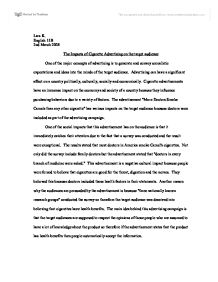 The Impacts of Cigarette Advertising on the target audience

Lara K. English 11B 2nd March 2008 The Impacts of Cigarette Advertising on the target audience One of the major concepts of advertising is to generate and convey unrealistic expectations and ideas into the minds of the target audience. Advertising can have a significant affect on a country politically, culturally, socially and economically. Cigarette advertisements have an immense impact on the economy and society of a country because they influence purchasing behaviors due to a variety of factors. The advertisement "More Doctors Smoke Camels than any other cigarette" has various impacts on the target audience because doctors were included as part of the advertising campaign. One of the social impacts that this advertisement has on the audience is that it immediately catches their attention due to the fact that a survey was conducted and the result were exceptional. The results stated that most doctors in America smoke Camel's cigarettes. ...read more.

The 'bandwagon' advertising technique is used in this situation, which is when the company exploits the desire of most people to join the crowd, because the advertisers want the target audience to care about the popularity of the product and give them the opportunity to be on the winning side. The issue of doctors and their status in society rises because they should be respected members of a society. With this advertisement, some of the accepted norms in society have to be rethought because doctors are promoting cigarettes so the matter should be reconsidered. Another social impact included in this advertisement is the problem of racial discrimination because only white people are portrayed in the advertisement. Advertising in general has affected racial minority groups in numerous ways because sometimes particular ethnic groups are not part of the audience. The doctor in the picture is white and so is the lady towards the bottom of the advertisement which sends across the message that the main target audiences are white people of old and young age. ...read more.

It could be argued that advertising is uneconomical because most advertising simply encourages consumers to buy a certain brand and this advertisement definitely follows that strategy because of the emphasis on the brand name "Camel." The brand name is outstanding and easy to remember because of the straightforward name and simplistic logo and packaging. Advertising has a great impact on various elements of a country with a specific focus on the audience that the good is aimed at. The advertisement "More Doctors Smoke Camels than any other cigarette" uses a rhetorical question to address the target audience in an indirect way in order to persuade them. Even though there is a positive impact on the economy, the social impact is negative because there is a strong indication that only certain types of people should be allowed to purchase the product and the audience believed that cigarettes had health benefits when in fact it is harmful to their health. ...read more.