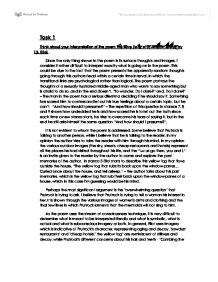 Task 1 Think about your interpretation of the poem The Love Song of J. Alfred Prufrock by T.S. Eliot. Since the only thing shown in the poem is its surface thoughts and images, I consider it rather difficult to interpret exactly what is going on in the poem. This could be due to the fact that the poem presents the apparently random thoughts going through this authors head within a certain time interval, in which the transitional links are psychological rather than logical. The poem portrays the thoughts of a sexually frustrated middle-aged man who wants to say something but is afraid to do so, and in the end doesn't. "To wonder, Do I dare?" ...read more.

In my opinion the author tries to take the reader with him through his mind. In my opinion the various outdoor images (the sky, streets, cheap restaurants and hotels) represent all the places he had visited throughout his life, and the "Let us go then, you and I," is an invite given to the reader by the author to come and explore the past memories of the author. In stanza 3 Eliot starts to describe this yellow fog that flows outside the house. "The yellow fog that rubs its back upon the window-panes... Curled once about the house, and fell asleep." - the author talks about his past memories, which is the yellow fog that rub their back upon the window-panes of a house, which in this case I'm guessing would be his mind. ...read more.