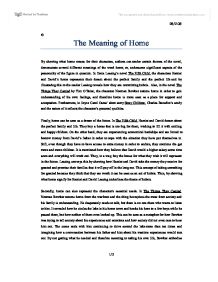 a) The Meaning of Home By showing what home means for their characters, authors can render certain themes of the novel, demonstrate several different meanings of the word home, or, underscore significant aspects of the personality of the figure in question. In Doris Lessing's novel The Fifth Child, the characters Harriet and David's home represents their dream about the perfect family and the perfect life and by illustrating this to the reader Lessing reveals how they are committing hubris . Also, in the novel The Things They Carried by Tim O'Brien, the character Norman Bowker returns home in order to gain understanding of his own feelings, and therefore home is more seen as a place for support and acceptation. Furthermore, in Joyce Carol Oates' short story Stray Children, Charles Benedict's study and the nature of it reflects the character's personal qualities. Firstly, home can be seen as a dream of the future. In The Fifth Child, Harriet and David dream about the perfect family and life. They buy a house that is too big for them, wishing to fill it with smiling and happy children. ...read more.

He desperately needs to talk, but there is no one there who wants to listen to him. It revealed how he circles the lake in his home town and honks his horn to a few boys while he passed them, but how neither of them even looked up. This can be seen as a metaphor for how Bowker was trying to tell society about his experiences and emotions and how society did not even care to hear him out. The scene ends with him continuing to drive around the lake more than ten times and imagining how a conversation between his father and him about his wartime experiences would turn out. By not getting what he needed and therefore resorting to taking his own life, Bowker embodies the damage war can do to a soldier long after the war is over. O'Brien shows how the idea of home represents our deepest and fundamental needs and that when those are not fulfilled we suffer. Thirdly, the character's idea of the perfect home can also reflect upon certain traits of this person. ...read more.

However, the meaning of home is not restricted to being just one thing. O'Brien can also show how Bowker is a character who needs constant support and is too weak to handle the hardships himself by rendering how Bowker desperately needed comfort when he returned home. As in the case with Charles Benedict and his study, home can also be used to show how he thinks, how he wants the city to look like in his role as a city planner. Oates can therefore also deliver social criticism through illustrating the meaning of home; how Benedict wants everything to look perfect and therefore he plans the city without taking the living conditions of certain people into consideration. In addition, the first example with Harriet and David and their view of home can also help the reader characterise them as determined people with set goals in the future and perhaps somewhat inconsiderate of their future troubles that they may face by ignoring the problems they are already experiencing. Hence, home does not only mean one thing but the reader can often draw several significant pieces of information out from it. ?? ?? ?? ?? 28/2-08 1/2 ...read more.