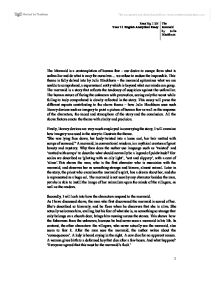 The Mermaid by Julia Blackburn

The Mermaid is a contemplation of human fear - our desire to escape from what is unfamiliar and do what is easy for ourselves... we refuse to endure the impossible. This theme is fully delved into by Julia Blackburn - the mermaid epitomizes what we are unable to comprehend, a supernatural entity which is beyond what our minds can grasp. The mermaid is a story that reflects the tendency of suspicion against the unfamiliar. The human nature of facing the unknown with precaution, seeing only the worst while failing to truly comprehend is clearly reflected in the story. This essay will parse the different aspects contributing to the above theme - how Julia Blackburn uses such literary devices such as imagery to paint a picture of human fear as well as the response of the characters, the mood and atmosphere of the story and the conclusion. All the above factors emote the theme with clarity and precision. ...read more.

In contrast, the other characters- the villagers, who never actually see the mermaid, also seem to fear it. After the man sees the mermaid, the author writes about the 'consequences'. A lady is heard crying in the night. A cow dies for no apparent reason. A woman gives birth to a deformed boy that dies after a few hours. And what happens? 'Everyone agreed that this must be the mermaid's fault.' The cow may have had an underlying condition. The baby may have been always malformed. The lady may have been crying for any mundane reason. But the fact that this happens after a man sees a mermaid on the beach causes the people to blame it on that unseen, paranormal being that is unfamiliar to them. It appears that everyone in indirect contact with the mermaid is 'cursed'. The priest sent to exorcise the spot where she was found, later has a nightmare about her slithering upon his body, tail wrapped eel-like around his legs. ...read more.

He no longer fears her. But it is too late, for she is already gone, and the magic that he could have experienced is an opportunity lost. He watches for the 'glistening among the fish', she has become a treasure to seek, but his own fear in the beginning of the story kept him from seeing the mermaid's beauty. If he were to see her again, would the cycle of fear simply begin anew? In conclusion, it is very evident that Julia Blackburn is using all the above techniques to illustrate the story's main theme: people are frightened of what they don't understand. Through the use of imagery, the characters, the mood and the ending of the story, it emphasizes that when one encounters a situation of which they have no previous experience of, no anticidents or rules on how to react, as the event of the mermaid reveals, they panic, escapes, and blame the problems on the great unknown. ?? ?? ?? ?? Resa Ng 11JN Year 11 English Analytical Essay The Mermaid by Julia Blackburn Resa Ng 11JN Year 11 English Analytical Essay The Mermaid by Julia Blackburn 2 1 ...read more.