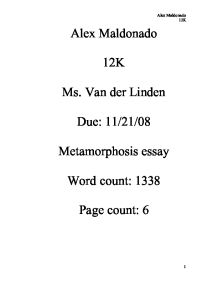 Alex Maldonado 12K Ms. Van der Linden Due: 11/21/08 Metamorphosis essay Word count: 1338 Page count: 6 In the novella "Metamorphosis", when protagonist Gregor Samsa is hit by an apple, thrown by his father Mr. Samsa, the collision brings forth this sudden realization within Gregor and his family, as told by the Bible, 'by the apple "your eyes shall be opened": How and in which way are Gregor's eyes opened? How about the family? Do you believe that the use of apples has religious significance? Why or why not? The novella "Metamorphosis" tells the story of Gregor Samsa following his transformation into an insect. This essay is about the events that follow Gregor's injury, caused by the wrath of his father, when he gets an apple stuck in his back, as well as the significance of this act. The metamorphosis in this instant is the change of attitudes that exclude Gregor from the rest of his family. Gregor becomes an outcast when he is transformed into an insect. His own family is unable to communicate with him or identify with him. While he had previously been counted on to provide for his family, Gregor becomes a burden on his family. ...read more.

and how his mother then ran up to his father, on the way her tied up skirts one after the other slipped toward the floor, and how, tripping over her skirts, she hurled herself onto his father and, throwing her arms around him, in complete union with him-but at this moment Gregor's powers of sight gave way-as her hands reached to the back of his father's head and she begged him to spare Gregor's life."[2] His father acts out of resentment for Gregor. However, his mother protects her son Gregor from his own father, who is intent on killing Gregor. His mother acts instinctively towards Gregor, and when he is in danger she once again sees him as her son and not as a pest. This attack and its consequences bring the family to the realization that Gregor is not a beast, but rather that he is a part of the family. It makes their attitudes suddenly change toward Gregor, they become more accepting to his misfortune and try to endure it. However, the injury that Gregor's father inflicted with the apple did not heal. The apple remained inside Gregor's insect body. "Gregor's serious wound...seemed by itself to have reminded the father that, in spite of his present unhappy and hateful appearance, Gregor was a member of ...read more.

Adam is punished by God for eating the apple he was offered, and a similar scene is created in the book with the same symbols. Gregor's father attempts to force Gregor away by throwing apples at him. This punishment is his father's response to Gregor's unwelcome interruption in the family. Apples are the same object used in the Bible to act against the almighty God. This embodies the punishment in the Book of Genesis that God's perfect son has to take for the mistake he has made. By accepting responsibility for the "original sin" of eating the apple, human kind is transformed from an almost immaculate figure to a creature with many flaws and guilt that will extend until the end of time. In conclusion, after the attack on Gregor his family comes to realize even though Gregor is no longer human he is still an irrefutable member of their family. After the apple is lodged in Gregor's body, producing a fatal wound, they begin to accept him again and, even though they only do it because they feel its their duty as a family, slowly but surely interact with him more and endure his situation. There is also a strong religious connection as Gregor is expelled from his Eden, the living room, using the same symbols that were used to expel Adam and Eve from the Gardens of Eden. ...read more.