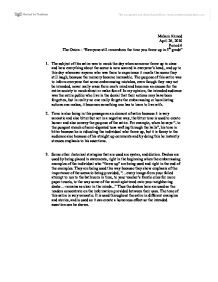 The Onion Everyone still remembers the time you threw up in 5th gradeThe purpose of this satire was to inform everyone that some embarrassing mistakes, even though they may not be intended, never really erase from ones mind

Maham Ahmed April 26, 2010 Period 6 The Onion - "Everyone still remembers the time you threw up in 5th grade" 1. The subject of this satire was to mock the day when someone threw up in class and how everything about the scene is now scarred in everyone's head., and up to this day whenever anyone who was there to experience it recalls the scene they still laugh, because the memory became inerasable. The purpose of this satire was to inform everyone that some embarrassing mistakes, even though they may not be intended, never really erase from one's mind and becomes an excuse for the entire society to mock about or make fun of. ...read more.

2. Tone is also being in this passage as an element of satire because it is very sarcastic and also bitter but not in a negative way, the bitter tone is used to create humor and also convey the purpose of the satire. For example, when he says "..to the pungent stench of semi-digested tuna wafting through the halls", his tone is bitter because he is ridiculing the individual who threw up, but it is funny to the audience also because of his straight up comments and by doing this he instantly stresses emphasis to his assertions. ...read more.

They are being used this way because they show emphasis of the importance of the scenario being provided, "...every image-from your failed attempt to run to the bathroom in time, to your teacher's frantic cries for more paper towels, to the way some of the vomit splattered onto your neighboring desks...-remains as clear in the minds..." Thus the dashes here are used so the readers concentrate on the information provided between their uses. The tone of this satire is very sarcastic. It is used throughout the satire in different examples and stories, and is used so it can create a humorous effect so the intended assertion can be shown. ...read more.