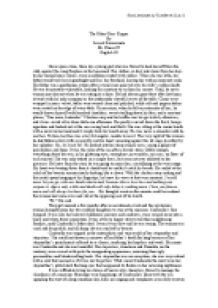 The Other Slipper - retelling the story of Cinderella.

﻿Suriawinata/Cinderella/ The Other Glass Slipper By Jesseril Suriawinata Ms. Placer P7 English 10 Once upon a time, there lay a young girl who was forced to heat herself from the cold, against the snug fireplace in the basement. Her clothes, in dust and stains from her day-to-day menial house chores, were in addition coated with cinders. When she was little, her father would tuck her in goodnight and kiss her forehead, leaving her with an innocent smile. Her father was a gentleman, whom after several years grieved over his wife?s sudden death. He was desperately vulnerable, looking for someone to cushion his sorrow. Until, he met a woman one day out when he was eating at a diner. He had always gone there after late hours at work with his only company as the intolerantly cheerful server of the table. Chairs were wrapped in moss velvet, tables were waxed clean and polished, while salt and peppershakers were seated on the edge of every table. On occasion, when he felt an extremity of loss, he would drown himself with hunched shoulders, sweat strolling down his face, and a constant phrase, ?One more, bartender.? Chicken soup and hot coffee was his go to dish, otherwise, and it was served at his diner table one afternoon. He quietly scarved down the thick, lumpy appetizer and looked out at the cars racing back and forth. She was sitting at the corner booth with a novel in her hand and it simply took his breath away. He was never a romantic until he met her. To him, her face was every bit angelic, unable to resist. The very sight of the woman he had fallen in love with so quickly sent his heart careening against his rib cage, besotted by her splendor. Yes, he loved her. He looked into her deep oceanic eyes, seeing a galaxy of possibilities and hope. ...read more.

Cinderella stood, flabbergasted, at the single shake of enchantment, transforming the common pair of mice into a coachmen and a doorman, the pumpkin harvested in the backyard shaped into a well-decorated carriage, and the three regular horses became a sparkling chariot of white horses. She blinked repetitively, astonished at her fairy godmother?s work. ?Oh! You won?t be able to attend the ball in those clothes. Here, I?ve been wanting to use this dress all year.? She shook her wand once again and encircled Cinderella with an atmospheric phenomenon, shifting her haggard rags into an assortment of crystals dangling on every inch of her dress. She lifted up the skirt of the dress and was delighted to find little radiances at her foot; her glass slippers were absolutely stunning and so was she. ?Hurry, Cinderella. You mustn?t be late any longer. The prince shall be waiting. But I shall warn you, my dear, when the clock strikes midnight you mustn?t ignore it. The spell will be broken and everything will turn back to normal.? She insisted, ?Thank you, fairy godmother. If only I can show you how much I-? ?Dear, there isn?t time. Go.? Cinderella hopped into the carriage and rode off into the midnight and as she did, she looked out to the tiny ray of moonlight peering into the glass window and smiled ever so subtly of her anticipating fate. The doors were open for her, for the first time. It was a remarkable sight she saw. Women were everywhere, clothed in their best and clinking champagne glasses, celebrating their beauty and freedom. As she walked down the steps to the ballroom, she felt a running tension from the eyes of envious women. Cinderella caught a glower of her stepmother, staring at her with disturbingly grim eyes as if its image itself could easily haunt her thoughts but she shrugged it off in hope that the glory she felt that night would triumph her fears. ...read more.

Her stepmother?s voice was ringing into her inner thoughts again. For years, she didn?t know how to stop its trail of discouragement but it did not stop her, she quickly called out, ?Excuse me your majesty, but may I try the slipper?? she pleaded. They all turned back to find a pitiful girl with a broom standing on the staircase. The prince stared in disbelief, he felt he knew her but couldn?t recall. ?Well of course, I was mistaken that this mansion only holds three people.? The prince was glaring at her stepmother and stepsisters with such disappoint. ?Your highness. She is just a maidservant, who couldn?t have possibly gone to the ball. She was here all night.? ?Nevertheless, the rule states that every woman who lives in a household must undertake the fitting.? The gentlemen usher defended. Cinderella ran, excited and hopeful and sat promptly on the velvet chair as the bearer scooped her feet into the slipper. ?It fits!? he said. The prince?s face lit up, glowing with rapture. ?I?ve found you!? he expressed. On the day of the royal wedding, the sun was springing into the horizon, blue birds were chirping, and the royal staff was up and ready, preparing decorations and white roses. Cinderella stood across a mirror, putting on her lace veil and flipping it back to reveal her face. It was painted with color, blush onto her cheeks and a smile across her face. The prince was standing at the other end of the room, dressed in a regal suit and hands crossed together. As Cinderella walked down the aisle, his head looked up from looking down at his shoes as the orchestra began playing and pulled a smile. His smile was shy yet confident, gentle and warm. His eyes squinted just slightly, like he was seeing something so saintly and bright. With that, she couldn?t possibly think of a better moment than this ? a wedding gown, a happy life, a prince, and a perfect ending. ...read more.