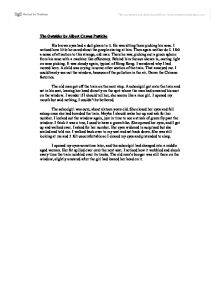 The Outsider by Albert Camus Pastiche His brown eyes had a dull gleam to it. He was sitting there picking his nose. I noticed how little he cared about the people staring at him. Then again neither do I. I felt a sense of attraction to this strange, old man. There he was, picking out a green sphere from his nose with a machine like efficiency. Behind him the sun shown in, casting light on nose picking. It was cloudy again, typical of Hong Kong. ...read more.

The old man got off the train on the next stop. A schoolgirl got onto the train and sat in his seat, leaning her head directly on the spot where the man had smeared his snot on the window. I wonder if I should tell her, she seems like a nice girl. I opened my mouth but said nothing, I couldn't be bothered. The schoolgirl was cute, about sixteen years old. ...read more.

Her eyes widened in surprised but she smiled and told me. I walked back over to my seat and sat back down. She was still looking at me and it felt uncomfortable so I closed my eyes and pretended to sleep. I opened my eyes sometime later, and the schoolgirl had changed into a middle aged woman. Her fat spilled over onto the next seat. I noticed how it wobbled and shook every time the train rumbled over its tracks. The old man's booger was still there on the window, slightly smeared after the girl had leaned her head on it. ...read more.