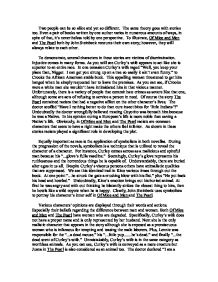 Two people can be so alike and yet so different. The same theory goes with stories too. Even a pair of books written by one author varies in numerous amounts of ways, in spite of that, it's nevertheless told by one perspective. To illustrate, Of Mice and Men and The Pearl both by John Steinbeck recounts their own story; however, they will always relate to each other. To demonstrate, several characters in these stories are victims of discrimination. Injustice comes in many forms. As you will see Curley's wife appears to act like she is superior to an entire race. In one occasion Curley's wife raged "Well, you keep your place than, Nigger. I can get you strung up on a tree so easily it ain't even funny." ...read more.

As shown in these stories racism played a significant role in developing the plot. Equally important as race is the application of symbolism in both novellas. During the progression of the novels, symbolism is a technique that is utilized to reveal the character of a character. For instance, Curley comes across as a malicious and spiteful man because his "...glove's fulla vaseline." Seemingly, Curley's glove represents his ruthlessness and the horrendous things he is capable of. Understandably, there are buried alter egos in us all. Despite Curley's viscous persona others have animalistic qualities that are suppressed. We see this identical trait in Kino various times through out the book. At one point "...he struck the gate a crushing blow with his fist." plus "He put back his head and howled." ...read more.

his "...little pup.......he's dead." and finally "...the dead scent of Curley's wife." Unmistakably, Curley's wife is in the same category as worthless animals. As you can see, Curley's wife is conveyed as a mere creature but Juana in The Pearl is also considered as an animal too. The doctor declared "I am a doctor, not a veterinary," He does not directly communicate with Juana but still considers her as an animal. It is shown time and time again that John Steinbeck doesn't know how handle women as characters. The same issues are found in both novellas that Steinbeck has written. Race, symbolism, and gender all play a part in his certain writing style. In detail, his stories also come from his life experiences. Particularly with his experiences with women (his first, second, and third wife). John Steinbeck seems to write women through a bias opinion. As always behind the scenes of a fictional story there lies a realistic one. ...read more.